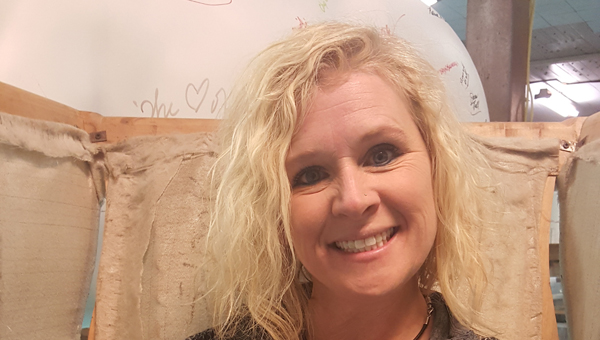 Becky Collins is an artist from Cincinatti, Ohio who will faux finish a fiberglass horse as part of the ‘Art of the Horse’ project in a space in the Mill Spring Agriculture Center. Her horse will eventually look like a bumblebee when finished in the next few weeks before setting it up in front Burrell’s Fuels in Tryon on Trade Street to be displayed from April until August. Collins is one of 13 artists across the Foothills tasked with designing a fiberglass horse with their sponsors by March. The horses will then converge at one location and go up for auction at the Tryon International Equestrian Center in August. (Photos by Michael O’Hearn)

Becky Collins is an artist obsessed with bees. She even uses an art form dating back to the Mayans and ancient Egyptians, encaustic art, as her central outlet for her creativity. Encaustic art utilizes beeswax and, according to Collins, means “to burn in” when creating sculptures and paintings.

The Mill Spring Agriculture Center artist has been using the encaustic method for eight years now, and will incorporate her teachings in a new project designed to benefit the community surrounding her.

Collins is one of a handful of community artists tasked with designing a fiberglass horse, to be displayed in local towns across the area between April and August.

She is also a disabled U.S. Army veteran and was active for five and a half years as a paratrooper in Fort Bragg.

“I’m an encaustic artist and faux finisher, but I also paint cabinetry and do furniture,” Collins explained. “I do a lot of volunteering for hospice and TFAC and all kinds of things in town, but I just recently got involved with the ‘Art of the Horse’ and I have this horse. My sponsor is Burrell’s Fuel on Trade Street on Tryon.”

Collins has her horse design set up in the art studio of the Mill Spring Agriculture Center to work on until March.

Her horse will then be located in downtown Tryon during the five-month stretch in which all of the horses will be stationary in some area of the community.

“It’s going to look like a big bumblebee, that’s what the end result will be,” Collins continued. She described the horse in more detail, saying that it will be all black and yellow or gold. The stripes will be lifted and dimensional and it will have metal wings with a band that comes down and around the side (making the wings removable) His antennae will be springs with ball bearings on the ends so they have some movement. The horse will be sealed with car sealer, and the hooves will be red, white and blue at the sponsor’s request. 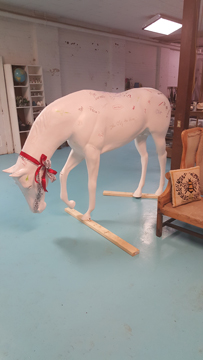 “I’ve been painting for probably about 20 years now and had my own faux finishing business in Cincinnati for about 16 years and when we first moved here, I was like ‘Oh, I’m just going to kind of let that fade away,’ and just paint canvas, but then it just called me and I keep doing it.”

When Collins arrived here four years ago, the first thing she wondered was if there was going to be a space for her to do her art.

“I had a studio in my basement for 20-some years and I talked to Mindy and she said, ‘Well, you should check at the Ag Center,” Collins said, referring to Mindy Wiener and her conversation with her about needing a place to do her work. “Then I met Michelle and Grant next door, one of whom is a fashion designer, and she said ‘There’s a space right next to me.’”

Collins said when she saw the space, she could never dream of how much space the room had as opposed to her basement studio in Ohio. She also felt drawn to it because there was a bumblebee sign outside in front of the space.

The name of her studio is Bee-Spoke studio, and came to her because of her obsession with bees, but also has to do with custom designs such as the horse she is currently working on with her sponsor in Tryon.

“The name came to me because, anything bees, I’m all about it,” Collins said. “I have bee towels, bee socks and so that’s where my idea of the bee came from for the horse. Bespoke means custom.”

Once the horse is complete, Collins is considering opening up the studio and facilitating classes and parties.

“I’m going to also be doing some classes and some girls’ nights when the horse is gone,” Collins said. “I’ll set up tables here and we’ll do vision board parties and painting little canvas and projects and teach how to distress furniture and lining and all that good stuff.”

The artist aims for sometime in February to begin those classes to allow herself time to finish her horse sculpture.

Encaustic art has not always been Collins’ medium of choice, as she stated she started out doing acrylic work before a friend of hers introduced her to the medium.

“A friend of mine, and this is so funny, posted that she went to a class and there she had done four or five different mediums and when she posted those photos I was like, ‘What’s number two?’ and ‘How do you do that?’” Collins explained. “She said its encaustic and sent me a little blurb about it and then the next thing I know I’m in the art store trying to buy encaustic stuff.”

She said she didn’t know wax could be used for anything other than lip balm and was interested in trying it. Collins experimented with the medium at home and was not happy with the results, stating “anything I could do wrong with encaustic, I did it.”

“I thought my husband wasn’t going to be home and I could make a mess without him yelling at me, but I was melting it on my stove and it was embarrassing,” Collins said. “It was the worst thing I could have done, so I made a cute little painting for my husband for our 20th anniversary, and I said I needed to take a class, but then he surprised me with tickets to a week long encaustic camp in Oregon.”

She wasn’t able to think about anything else for three months because the class wasn’t until April, but once Collins got there she thought she was at home.

“I have some pieces at the Nest in Tryon, and sold some pieces at Thompson’s a couple years ago,” Collins said. “I’ve done some showings with my artwork at the Upstairs Art Space and I’ve done some, not full-on classes, but just getting people comfortable with encaustics at (Tryon) Painters and Sculptors.”

Working with encaustics and wax is intoxicating to Collins and she said she would not mind if she did not do anything else but encaustic art from here on out.

“It brings me in and into focus when I do it, burning the wax,” Collins said. “It’s so good. I enjoy doing it so much and it has become a part of me.”