Six month lay-up not as easy as it sounds 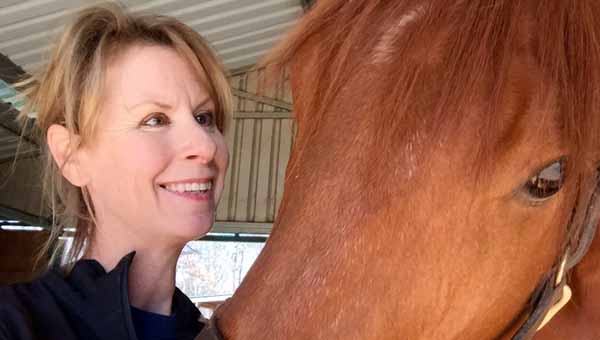 Looking to all the world as if he is sporting the world’s worst bikini wax, my young ex-race horse, Forrest, having just received an ultrasound where a layman might consider to be his thigh and the top of his bum, has been given a diagnosis of a mild stifle injury, requiring a lay-up of six months and very careful rehab.

Oh, a ‘stifle?’ That, in a nutshell, is a horse’s hind knee and the vet, Dr. Gillis, rattled off (with me doing my best to look as if I was capable of absorbing any of it) how this joint has “three variable communicating compartments, composed of bone and cartilage, as well as several ligaments, the joint synovial linings, and joint fibrous capsules, and the menisci.”

Got it? Me either. But here’s a cool fact the next time you want to stun someone at a cocktail party: horses have so many supporting structures in their stifle that they could sever their ACL and be just fine.

“See this collateral ligament?” she asked, pointing to the monitor as she moved the ultrasound probe over the injured area. The scan looked like grey macramé but I nodded anyway. “And this thickening, here?”

I looked at Forrest, sedated, shaved, and gelled-up so that the probe could glide easily across affected areas. For him, this was an alien abduction. For me, this was a mixture of both good and horrifying news: good in that his injuries are mild and his prognosis is good that he will recover fully IF his rehab is done to the letter, and horrifying in that I have to find a way, without constantly tranquilizing, of containing an extremely fit and strong young horse who is now not allowed to be turned out in his customary field each morning for five hours, to release his inner pi** and vinegar, but be simply hand walked, twice daily for 20 minutes.

“He’s going to implode,” I said, without realizing it, aloud.

“It’s not easy,” Dr. Gillis commiserated but added that studies show those horses that are simply turned out for a year to recover, in a field, have only a 25 percent chance of returning to work and not re-injuring themselves within a year. Why? Because like Jack Russells on steroids, they jump around and spin and buck and constantly retweak the injury.

So hand walking it is, twice a day, along with carefully monitored turn-out in a tiny paddock with a mound of his favorite hay, so he can stuff his face and get some sun, all while being watched like a hawk by me, as I engage in routine daily barn chores.

It’s only been a week and already I’ve snapped at Paul. On the fifth day of hand walking, morning temperature in the teens, I was carefully leading Forrest (or should I say from appearances, flying a big, red kite) when he went airborne, striking the air with his front hooves as Bonnie, our terrier, just released from the house, clad in her neon pink jacket, came tearing up behind us, followed by a just as exhuberant Rosie, and Paul, in coat and cap, hands shoved in his pockets.

“What the hell?!” I bellowed, then, “Great, just GREAT!” as the commotion set off a mare in the adjoining field so that she came galloping up the fence line, basically relaying to Forrest, “Annnnnnd they’re OFF!” Forest flung his beautiful, chiseled head around, smacking me right in the face and with one gloved hand holding his lead and the other holding my eye, I glowered at Paul.

Chastened, not saying a word, Paul caught up to Bonnie, swept her up in his arms and bundled the wiggling pink creature back into the house. I halted Forrest and let him pick at a few blades of grass to quiet him before attempting to walk him steadily back to the barn without parasailing.

The only good news was that it was now so cold that both my face and feet, particularly the one foot he stomped on as he cartwheeled, were completely numb and with despair, I looked at my watch and saw that we still had to walk 15 more minutes, or according to ‘fit bit,’ a mile and a tenth.

When I returned to the house, removing more layers than a Russian nesting doll, I immediately took note that Paul did what he always does when he’s in trouble: the floors had been vacuumed and the kitchen was immaculate. On top of this, he was sparing me another chore I hadn’t looked forward to: loading one of our cats in a crate for a visit to the vet, and was hurriedly carrying her to the car so that, with luck, we wouldn’t meet face to face until I was over my enormous huff.

I thanked him, both silently and aloud when he returned, everything quite forgiven. I know how awful it feels to be the one in trouble over an avoidable gaffe. I’ve been on the other end of it, myself, when pilfering some of his imported Stilton or failing to clean up a dog pee he’d just stepped in when he was in the middle of cooking Christmas dinner. “Come clean this up!” he roared, “I’m making a ROUX! I just can’t stop in the middle of making a ROUX!!”

I sat down and poured an enormous mug of hot tea and checked the extended forecast: snow and ice this weekend.

Five months and three weeks to go. Shoot me, now.

When things wake me up in the dead of night

In January it’s so nice, While slipping on the sliding ice, To sip hot chicken soup with rice. Sipping once,... read more