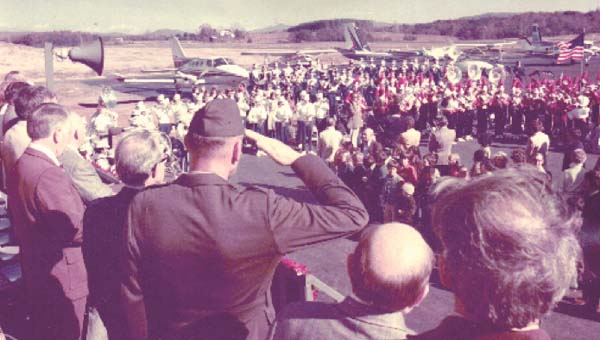 Embodying the same bold and adventurous spirit as the Wright Brothers and that First Flight, the Rutherford County Airport operates in the belief that great things come from humble beginnings. Built in 1975, it officially marked 40 years in business on Nov. 21. Already famous for its so-called “Hundred Dollar Burger,” this scenic country airport is small, yet mighty, and growing by the day.

Following the birth of aviation in North Carolina, several private ”grass strips” were started in Rutherford County. The towns of Rutherfordton, Spindale, Lake Lure, Harris and even Cleghorn Plantation all had specific grass strips for planes to land. This continued until the late 60s and early 70s when aviation operators realized the need for having one paved airport for the whole county. Not only did this feed the pipeline for military and commercial aviation, but as an economic development asset for Rutherford County, as local businesses and their clients could use this airport.

The Rutherford County Airport was opened on Nov. 21, 1975 with a ceremony attended by the school bands of both East Rutherford and R-S Central High Schools, as well as a Marine general and Harrier jet from Marine Corps Air Station Cherry Point. A helicopter was onsite as a static display for photo ops.

Though vastly different in size from its regional neighbors, like Charlotte-Douglas International Airport, Rutherford County Airport remains proportionately busy. It is open every day, except Thanksgiving and Christmas Day, 9 a.m. to 6 p.m., with 49 aircraft based there and a daily average of about 10 aircraft in use. Though there are only two county-owned hangars onsite, there are 30 private hangars on the field.

Patterson and the other employees spend most days moving, checking and fueling aircraft for pilots both local and visiting, assisting with lodging and car rentals for visiting customers, performing upkeep of the runway, taxiway, and tie-down ramps, and performing general ramp safety and security checks.

All of that work will only grow. With a greater runway comes greater responsibility. Currently, the airport is considering the possibility of adding 1,000 feet to the runway. This would serve as an added safety margin for business class jets during periods of limited visibility or during rain or snow, as well as allow for bigger jets to use the airport. Though airport employees are currently on-call 24 hours a day to fuel aircraft after-hours, proposed self-serve pumps would allow customers to buy and pump fuel into their own aircraft anytime, and at a reduced cost.

Forty years means a lot of change in both the times and technology, but one thing certainly stays the same at the Rutherford County Airport, modern conveniences come with old-fashioned hospitality. For more information about the Rutherford County Airport, please contact Randy Patterson 828-287-0800 or via email at Randy.Patterson@rutherfordcountync.gov.