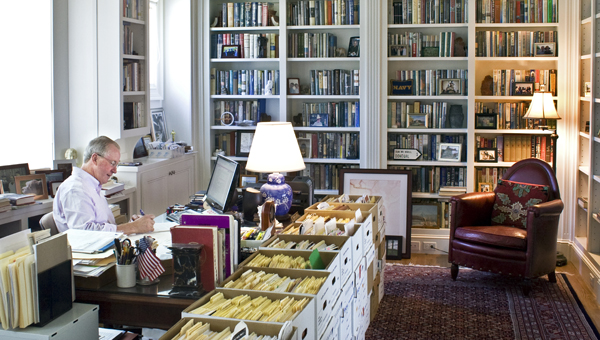 Tim Boyce in his library surrounded by a few of his 4,200 first editions and the boxes of files and notes for the first edition of his own non-fiction book to be published in early 2016. (Photo by Vincent Verrecchio)

Life in Our Foothills, November 2015
By Vincent Verrecchio

The first Marine on Iwo Jima sank to his ankles in the loose black sand, as did the 70,000 troops who followed. The M1 carbine in his hands weighed less than six pounds but almost a hundred pounds of gear loaded him down. The cinder cone of Mount Suribachi hunkered to the southwest under a blue cloudless sky. The fire in its volcanic gut heated the island from within while the sun baked the day in a shimmer. Wilted and virtually treeless, stinking of sulfur, at 9 a.m. on Feb. 19, 1945, Iwo Jima was at best a purgatory. About an hour later when the Japanese machine guns and artillery opened fire, it would be hell.

More than 60 years later, this harsh 2 x 4-mile island, geologically unchanged, was Tim Boyce’s idea of a great vacation destination. He slogged across the same sand carrying a three and a half-pound book. It was his first edition of Eric Hammel’s illustrated history “Iwo Jima: Portrait of a Battle.” Tim was there to meet with some of the Americans who survived 34 of the bloodiest days in the Pacific war. He would ask that they acknowledge themselves by signing the book that celebrated their bravery.

Today, Tim is pleased to open the book to a full-page photograph of soldiers advancing across a smoky beach. Signatures and dates cover the image. “The veterans were happy to sign, some thought it was nice that I’d ask,“ says Tim. “Jim Ware, one of the vets, however, didn’t want to sign that page and started flipping through. Finally he said ‘that’s me’ and pointed.”

James L. Ware’s signature is now next to the image of two men behind a low mound of sand. One is a dead Japanese officer. The other is described in the copy as “a pipe-smoking Marine reconnaissance scout.”

Iwo Jima was one more step in Tim’s journey that started in fourth grade when he discovered a passion for history in books. That journey has progressed steadily from one book to another, as facts in one book prodded his curiosity to know more about what could be learned in another.

“Why read a made-up story?” Tim thinks aloud. “History is so unbelievable…why people do what they do…human nature is endlessly fascinating.”

As Tim leads you to one of the many bookcases in his home, he notes, “Books are part of my history like signposts and benchmarks. I’m reluctant to let any go. I still have that first historical book. Number 17 in a series of juvenile historical fiction called ‘We Were There.’ Perhaps it struck a chord because ‘We Were There When Washington Won at Yorktown’ was about the surrender on the date that happens to be my birthday.”

In law school, his journey added a twist when he found his first signed edition. Over the course of his legal career of more than 35 years, signed first editions progressively filled beyond whatever bookcases he owned at the time. “A signed edition represents a connectedness to the author. And, if you have signatures of people that are in the book, that’s about as close as you can come to living the events. Let me show you this.”

The dust jacket of Thirty Seconds Over Tokyo is bright under a Mylar cover. This is the first edition of the true story by Captain Ted W. Lawson about Jimmy Doolittle’s one-way raid in 1942. Tim opens to the half title page and you see signatures arrayed around the title. He calls your attention to Robert L. Hite and notes that this name is also listed on the dedication page for those who did not return. That’s because Hite had not made it back when this book was published in 1943, but he was at the 2006 reunion in Ohio where Tim traveled specifically to “connect with history.”

“And look at the name right underneath.” The handwriting takes a moment to decipher as Tung Sheng Liu. “That’s one of the Chinese nationals who helped Americans get past the Japanese to ultimate safety.”

In 2011, Tim was in Hawaii for the 70th reunion of veterans of the attack on Pearl Harbor. He brought home his first edition of “Day of Infamy” signed by author Walter Lord and 50 of those who had been there on Dec. 7, 1941.

“I am always on the lookout. I think I’ve been in every used bookstore in every town I’ve ever been. I also keep track of my bookstore favorites on the Internet, looking for signing events.  I find titles by looking in the bibliography of a book I’m reading. Occasionally, a ‘find’ just comes my way. For my birthday, my sister gave me a signed copy of James Bradley’s ‘Flyboys’ that recorded the fate of ten pilots who had been shot down. My sister managed to get one of the survivors to sign as well: George H. W. Bush.

Retired from transactional law, Tim lives with his wife Tara in a Foothills home they call First Edition Farm. About 4,200 books exceed the capacity of his library shelves and spread throughout most rooms. About 1,700 are signed and soon one more will be added. In early 2016, Tim will be signing his own non-fiction work published by Vanderbilt University Press: Odd Nansen’s From Day to Day: The Diary of One Man’s Survival in Nazi Concentration Camps.

“I was reading A Lucky Child, a memoir by Thomas Buergenthal on how he survived the Nazi death camps as a boy and eventually became a justice at The Hague. I found in it the name of Odd Nansen, a heroic Norwegian, also swept up into the camp system, who Buergenthal credits with keeping him alive. I felt compelled to know more and be sure others knew the story.”

When asked if there would be room for more books after topping off his collection with his own signed first edition, Tim gives an are-you-kidding smile and replies, “There’s always room for another book.”