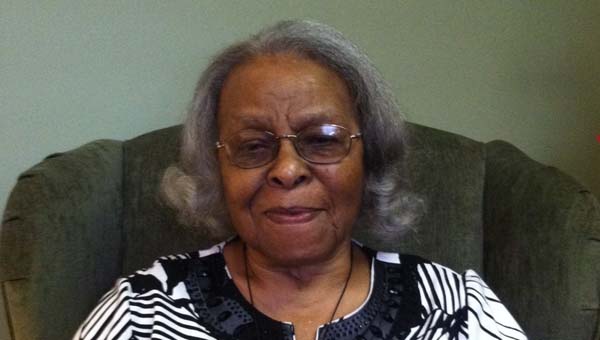 Addie Lee Hines was born in 1916 on a farm near Melvin Hills in Green Creek. Colonel Simpson bought her grandfather, Harrison Golden Simpson, as a slave to work live on the Old Simpson Farm and Plantation by White Oak Creek. Her parents, Doshia Miller and Arthur Simpson, married in 1914 and worked as tenant farmers for Gus Miller in Green Creek. The oldest of six children, Addie helped out on the farm and cared for her four sisters and one brother. She walked over a mile to school from the time she was six until she finished the eighth grade.

“I still remember my first teachers, Biredelle King and Sadie McEntyre. When I came home for school, I would milk cows, pick cotton, hoe, and do whatever there was to do on the farm. When I got big enough, I would help in the fields. That’s just the way it was. Momma did all of the cooking, but I helped with canning and washing. We made our own soap and used bluing to make clothes whiter and peroxide on stains. At first, it was hand washing, but then we got a washer with a wringer.

“After I finished the eighth grade, my parents provided food to Allen High School, a private boarding school for African American girls in Asheville, to pay for my ninth grade tuition. I graduated from Allen at 18 in 1934 and I married John Franklin Hines in 1938. We met at a closing program at the Rosenwald School in Green Creek when I was 16 and started going together. He came to visit me on Sundays after dinner and we would sit on the porch, but we had to come in when the sun went down. He was from Polk County and our families knew each other.

“For the first year we were married, we lived with John’s family on a farm in Green Creek. We helped them with their farming until we moved to another farm to work as tenant farmers. I remember the Depression years, but it was not so different because the farmers already had it pretty tough. We did the best we could by working hard. There was always something to do, so we didn’t have the time to think about the Depression.

“Working for the landlord, we gave half of whatever we grew to him and we kept the other half. We also had a cow, hogs, and chickens and grew vegetables and fruit and canned whatever we didn’t eat for the winter. Breakfast was corn bread, biscuits, or flat cakes with butter and molasses that we made ourselves. I couldn’t eat eggs but we had them, too. For lunch, we had vegetables from the garden and supper might be cornbread with butter and milk and sometimes sausage, meat, or chicken.

“Tench Miller, my Momma’s father, was one of first deacons of the Green Creek Missionary Baptist Church so you could say I was involved in the church all of my life. I taught Sunday school, sang in the choir, and was a member of the Sympathy and the Missionary clubs. We walked to that Baptist Church on most Sundays, but we also went to my husband’s church, the Cedar Grove Methodist Church in South Carolina near Chesnee sometime, too.

“For Christmas, we always visited the grandparents and, for birthdays, I always made a small cake for the children. We didn’t have much money for gifts but, in the fall, after we worked in the field and sold our half of the cotton, we bought clothes for the children. I also made clothes from flour sacks and remade hand-me-downs.”

John and Addie eventually had 15 children, including three sets of twins. Addie had their first six children delivered by a midwife. They moved to New Prospect, South Carolina in the 1940s and then moved to Rutherford County in early 50s, where she had her twins in the hospital. In 1953, the family moved back to Polk County near Herbert Page Road in Green Creek and then to a house on Pea Ridge Road.

Addie went to work as a cook in the Cobb Elementary school kitchen in the early 1960s, which was segregated at the time. When the state integrated the school system and closed Cobb Elementary, she went to work at Green Creek School. An excellent cook, she was known throughout the county for her pound cake.  Even though she only had ninth grade education, Addie eventually became that school’s cafeteria manager before she retired.

Keys to survival: We did the best we could by working hard.

Advice for future generations: Just stick with it.

What is cellulite, and how can we make it go away?

Being a nutritionist and master personal trainer, one subject comes up quite often, especially with new clients. “How can I... read more