Hoping for ghosts in an old Saluda B&B 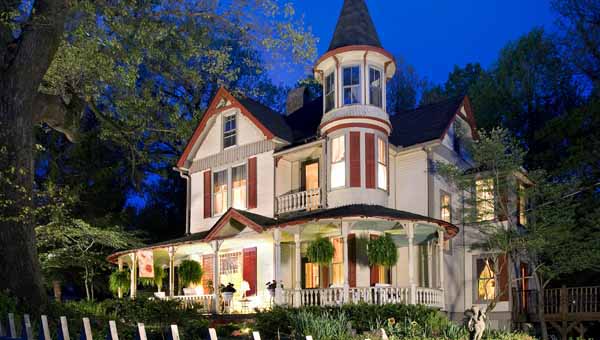 I want to believe.

My wife and I may not be the ever-skeptical Dr. Dana Scully and the intrepid Fox Mulder of the classic X Files television series, but we were certainly up for staying the night in Saluda’s The Oaks Bed & Breakfast, a fine old Victorian two-story that is reputed to be haunted. If we got lucky, we might actually see a ghost in the rambling and imposing guesthouse sitting on a hill on Greenville Street. At the very least, it would be a nice overnight get-away, exploring a 120-year-old home, just off the beaten path of the charming and strollable town of Saluda.

But I want to believe, and I was hoping to get lucky on that late-summer weekend when school had just started back and the hospitality industry takes a slight dip in business before the leaf peepers attack the Foothills like the walking dead looking for fresh human flesh amidst the colorful fall foliage.

Disappointment was not written into the script that was guaranteed to have a happy ending.

I arrived before sunset and ahead of my partner in investigative journalism and life in general to experience the inn in twilight transition, a time when shadows and fading sunlight are harbingers of the supernatural, playing tricks on the mind. Ahead of our appointed hour, I had been sent some less-than-professional cellphone photos with instructions to check out the upper-story windows. Are those pale and pasty apparitions looking out the turret windows or just white lacy curtains behind panes of old rippling glass? Mmmm? Maybe? Maybe not?

As I walked in the open front door, I heard voices… the innkeeper, Dale Potruski, was giving his welcoming spiel to the only other couple staying the night, a nice husband and wife from Charlotte, celebrating her birthday. With a twinkle in his eye and the practiced but sincere charm of a salesman, Dale was running down the list of many amenities of the inn and the town, as he led the couple through the first floor of the house. I hung back, not wanting to intrude or spook the unsuspecting guests. But I was listening, or as my wife would say, eavesdropping. It’s what I do.

Quick enough Dale gave keys to his paying customers and turned his attention to me, as I had been snooping about the entrance hall, library, parlor, and terrace. “Just trying to make myself available to the possibilities,” I said, a phrase I would come to say and think many times between then and the next day — especially during the night, about 2 a.m., when I had hopes of an encounter of any kind.

By then, the missus had arrived and we were ready for the tour and the pitch. Fortified with female intuition, the serious snooping could now begin.

“So, is this inn actually haunted?” I asked, as we stood in the entrance and strained to look upward toward the second floor through the twists and turns of the black and white staircase.

“Do you want it to be?” he replied, a phrase he uses often when asked about the inn’s ghostly appeal.

As a savvy and experienced hospitality professional, Dale likes to keep the door to The Oaks open to all possibilities of booking his six guest rooms. In recent years, the sightings of the supernatural have spread by word of mouth among those seeking a genteel visit with those who have crossed over. It is not something that Dale and his wife Donna market on their rack cards, yet, it is something they don’t deny. You can stay at The Oaks with or without ghosts, depending on your personal sensitivity to things that go bump in the night.

With his tongue in his cheek, Dale led the way, starting with the wide wrap-around porch with healthy Boston ferns hanging from gingerbread ornamentations, white and padded wicker furniture, and a haint blue ceiling of beaded boards. Ah, the first solid evidence of what-might-be.

For the past nine years, Dale and Donna have made many improvements and restorations to the house, but most often keeping the original charm as intact as possible. The house is the same deep cream color, trimmed in barn red, and the porch ceiling continues to be haint blue, something Donna said would always stay the same no matter what. Why a pale blue/green porch ceiling? Not exactly in keeping with the color scheme.

Haint blue, a color that defies formulation in the paint industry, is seen most often on the ceiling of porches of coastal homes in Charleston. You might also find that color overhead in doorways and windowsills, depending just how afraid of evil spirits the homeowner might be.

According to hearsay, haints or evil spirits cannot cross over running water, and this particular shade of blue is symbolic of said water. Therefore, spirits cannot come into the home. Other rumors say the blue is symbolic of the Carolina sky, and a way of extending daylight hours, which is again a deterrent to sun-shy spooks. It’s a curious, historic, regional, and rather pretty architectural element, but does it keep the spirits away? I hoped not.

We were assigned to the cozy Yellow Room in the heart of the second story, and with good reason. According to at least one past guest who tried to sleep there, recalled Dale, ghosts have been heard running up and down the hall during the night. We were being positioned to hear such foot traffic, if the ghosts were to be afoot that night. But it was noted that all the rooms in the house had a private bathroom, except for the Turret Room, which had a bathroom just down the hall… past the Yellow Room. A sudden call of nature in the middle of the night just might sound like patter of spirits, depending on just how the urgent the call might be.

As we toured from room to room, Dale recalled other ghostly reports by guests, such as the stately lady in Victorian attire who has appeared on the creaky staircase landing to seemingly make sure everything was in proper order. Later that night, Donna added that other guests have reported a strange feeling about the house that compelled them to tidy up their rooms. I’ve heard of friendly ghosts, but a neat-freak ghost whose very presence inspires picking up your underwear off the floor is a new one on me.

Neither Dale nor Donna can honestly say they’ve had any undeniable encounter with spirits, but each has had unexplainable experiences that make them wonder. On more than one occasion, Dale has been about the house doing chores when he has caught a glimpse of movement from the corner of his eye. But when he turns to see it, there is nothing. Donna has smelled pipe tobacco in the inn that prohibits smoking of any kind. Dale has noted the distinct odor of a lady’s perfume that he described as old and cheap. My grandmother’s Evening in Paris still haunts me but not in a supernatural way. And in a house where neatness counts, both have taken notice when doors they have purposely left open were found closed. All things to think about when you’re a would-be ghostbuster.

Guests are not often allowed on the third floor, but we were special, and Dale wanted to show us a yellow stain on green carpet that inspired an observation by one of the few who gained entrance: blood stains are really hard to remove. The third floor was filled with bric a brac, such as stored Christmas decorations and seasonal clothing. The ceiling was low and funky, creating an almost maze-like environment.

Evening was upon us, and the only growling I had heard so far was from my own stomach. Dale gave us our key and the run of the house. We were welcome to come and go as we pleased. If we needed anything, he was just a cell phone call away in the carriage house next door. The early evening stroll to downtown Saluda was most pleasant, and the smell of food from The Purple Onion and The Saluda Grade Cafe was enchanting.

After a dinner of mountain trout, London Broil, and several glasses of wine, we made our way back up the hill in the dark. The Oak B&B made for an impressive sight as we stood just beyond the picket fence. Strategic lighting and a full moon made for a welcoming experience. The old and massive oak tree in the front yard cast dancing shadows on the face of the house. Twin table lamps made porch-sitting after a big meal perfect for a nightcap and storytelling. We were joined by Donna, who until now, had been at her day job of creating hospitality for other venues.

She had no tales of terror to share, but she had heard many of her guests talk about the welcoming presence they had all felt in one way or the other. I reminded her that I had planned to prowl about in the wee hours of the night, which she was fine with. There was nothing to fear, and if I wanted to stay up all night in hopes of seeing a ghost, it was with her blessing. Another glass of wine and we were ready for bed…

At  2 a.m., I did indeed hear something strange in the darkness of the Yellow Room. It was a breathy growl of sorts. It was near, very near. It would come and go in a rhythmic pattern, starting out low and slow, growing in volume, and then slowly recede… reminding me what a pack of coyotes sounds like, which had been one of the evening’s topic of conversation. I sat up to listen more closely. I tried to focus both my eyes and ears on the source of this disturbance of the peace.

A cool night breeze wafted through the open window, billowing the curtains and carrying with it contrasting choruses by tree frogs, crickets and cicadas. By the light of the moon, the high oak branches waved and beckoned. The sound came again, even closer this time. It was in bed with me. It was my wife and her gentle snore. I could have poked her to make her stop, but it was a familiar sound, a comforting sound, a welcome sound as I lie awake in a strange bed in a strange house. I burrowed back down into the scent of fresh linen and slept the rest of the night like the proverbial dead.

Biking from North Carolina’s mountains to the coast, in…