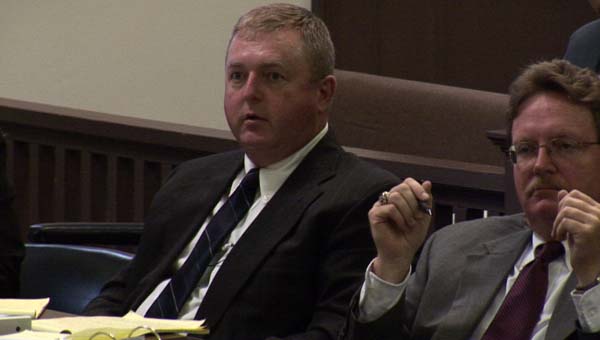 Travis McGraw sits during his 2014 trial of the 2011 murder of his wife Vanessa Mintz with defense attorney Tony Dalton. (Photo courtesy of CBS News)

After spending the last year in prison for the murder of his wife Vanessa Mintz, Travis McGraw is set for an appeal hearing today, Wednesday, Aug. 12.

McGraw, 48, was convicted of first-degree murder of his wife on June 4, 2014 following a trial in Polk County.

Mintz was murdered at the Saluda Mountain Lodge in Saluda, which her family owned at the time, on Feb. 19, 2011.

McGraw’s hearing is set for the North Carolina Court of Appeals after he appealed his conviction immediately following last year’s trial.

McGraw was sentenced to life in prison without parole and is serving his sentence at the Warren Correctional Institution in Manson.

The appeal is based on testimony provided by the N.C. State Bureau of Investigation (SBI) tool mark expert regarding a spent shell casing discovered on the floor of the lodge’s living quarters where Mintz was found fatally shot in the head as well as a shot to the arm.

McGraw was charged with first-degree murder just days after Mintz was discovered. McGraw posted a $750,000 bond after spending about a year in jail.

The state’s case was centered on the shell casing left on the floor beside Mintz shoes as well McGraw’s girlfriend giving him an ultimatum the Thursday prior to the Friday night murder. Mary Beth Fisher, who testified she and McGraw did not have a physical relationship, texted McGraw he needed to choose between she and Mintz and to give her an answer by that Sunday.

The state used cell phone text messages to show that McGraw’s motive for murdering his wife was to be with Fisher. McGraw had a $100,000 insurance policy on Mintz through the U.S. Air Force, which according to Air Force testimony, he called inquiring about hours after Mintz was discovered murdered.

McGraw testified the only way the shell was left on the floor was that it fell out of his pocket as he had been target shooting that day with the shotgun in question.

During testimony, according to cell phone records, McGraw’s phone was not near the location he said he target practiced that day.

The SBI found similar shells to the spent shell found at the lodge in McGraw’s truck the day of the murder. McGraw, a former police officer, cooperated with law enforcement and took officers to his home and surrendered all his weapons, including the shotgun determined at trial to be the murder weapon.

McGraw as well as his son testified that he spent the night at home with his son.

McGraw is asking the appeals court to either dismiss the case or overturn his conviction and sentence and have a retrial.