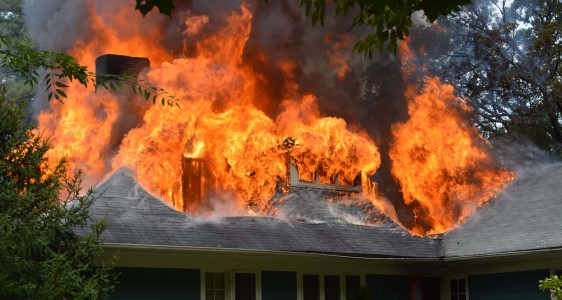 A well-known historic Tryon home was completely destroyed by fire on Tuesday, July 21 with the residents treated for smoke inhalation and firefighters treated for heat exhaustion.

The Tryon Fire Department was dispatched to 225 Wilderness Road, Tryon, just behind McFarland’s Funeral Chapel to the home of Inky Cloud at 11:31 a.m. Tuesday.

Tryon Fire Chief Joey Davis said upon the department’s arrival, firefighters found heavy fire conditions in the library and kitchen areas of the house. All occupants were accounted for, he said, but both were treated for smoke inhalation on scene.

“A quick knockdown of the room burning revealed the fire was in the void space between the drop down ceiling and a higher ceiling at the roof,” Davis said. “We placed a crew from Columbus fire on the roof for ventilation purposes. However, one firefighter was quickly overcome by heat and smoke so we changed operations from offensive to defensive.”

All Polk County’s six fire departments and a few agencies from South Carolina were called in to supply mutual aid to Tryon.

Davis said Tuesday’s fire was the largest fire the Town of Tryon has fought in its district since the Calvin Odell Jones house fire at 970 East Howard Street that occurred on Christmas Eve 2013.

Cloud’s home was built in 1929 and was approximately 3,000 square feet. Davis said unfortunately, the home is a complete loss.

Davis said although the department has not determined an exact cause for the fire, it appears to be electrical in nature. The occupants reported a TV and computer exploding, according to reports. Duke Energy was called for a tree on a power line at the lower end of the property, so Davis said that is a possible cause being investigated.

Huckleberry’s restaurant, located in downtown Tryon sent food and water out to the scene as well as offered all firefighters free dinner at the restaurant Tuesday night.

“I would like to personally thank Huckleberry’s, who also sent food out and has insisted that all firefighters who were there will eat free tonight (Tuesday),” Davis said.

Other efforts were being coordinated by individuals and Tryon businesses to raise money and supplies for the Clouds.

The fire is still under investigation. David said the he and the town are very thankful no firefighters suffered any more injuries than they did and are very thankful the occupants of the home were able to escape.

Photo: Several area departments fought a fire at 225 Wilderness Rd., Tryon on Tuesday, July 21, which destroyed the historic home owned by the Cloud family. The home was built in 1929. (photo by Brandon Shanesy)