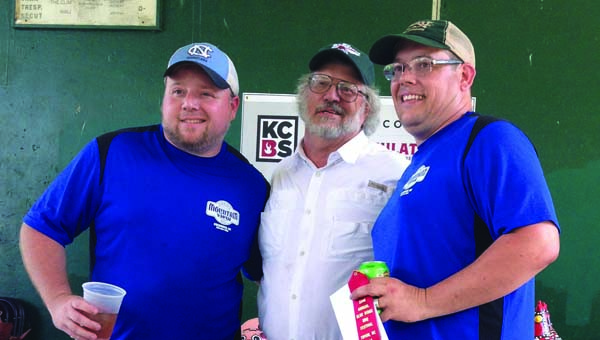 Most of the hoopla goes to the Saturday KCBS-sanctioned barbecue cooking event at the Blue Ridge BBQ & Music Festival. But Friday night’s Anything But and Dessert contests are serious business, too. And, as one of the judges described it, “There’s so much variety and color.”

The “Anything But” contest is for main dish creations. Its name derives from the requirement that the dishes submitted cannot include meat from any of the four categories required for Saturday’s judging – chicken, pork ribs, pork shoulder, or beef brisket.

Local restaurateur Shane Blackwell, owner of Mountain View BBQ & Deli in Columbus, has long been a participant in the BBQ Festival both as a competitor and also as one of the BBQ Vendors—that small group of about six cook teams that also sell to the public. This year, Shane and Mountain View BBQ team member Marshall Watkins were proud to have finished in second place in the “Anything But” contest with their entry of a bacon-wrapped filet with a sweet corn and crab salsa.

Blackwell said, “We’ve been competing for seven years now and have put in some amazing dishes. We finally found one the judges loved—and it was just a few points from being first place.”

Being a vendor, Blackwell gets to see both sides of the festival. The vendors are all located on the track area, where the crowds gather to eat and enjoy the music. The non-vending teams are all off in “Hog Heaven,” the cooking area across the Pacolet River.

“It’s always nice to see guys from other teams that we’ve known for years competing at the festival – it’s the only time we get to see them. When we got called down to get our prize, they all came over to give us high fives,” Blackwell said. “But what we really enjoy is feeding the people out there and representing our community and Mountain View BBQ in a positive way. I have the best crew in the world and couldn’t do any of this without them.”