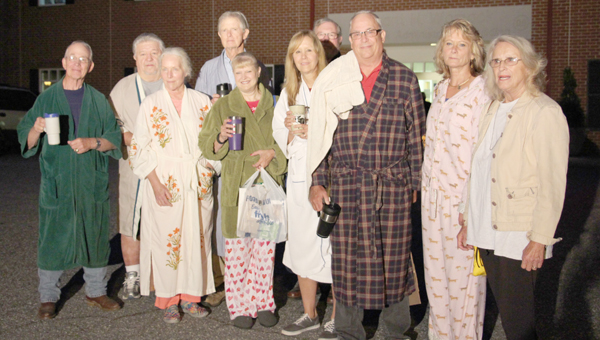 Pajamas and bathrobes were the dress code for about a dozen citizens, several from the Lake Adger area, who appeared with blankets and coffee mugs at the 6 a.m. work session Thursday of the Polk County Board of Commissioners. The meeting was called to review a revised contract between the county and Inman-Campobello Water District to share water resources. Schuyler Conard, second from right, organized the group in protest of the commission calling the meeting at such an early hour. Yesterday’s meeting was the first of three scheduled meetings to be held to review the contract, and could only be held at 6 a.m. so as to accommodate commissioners’ schedules. The next work sessions will be held June 29 at 6 p.m., and July 20 following the commission meeting. (Photo by Claire Sachse)