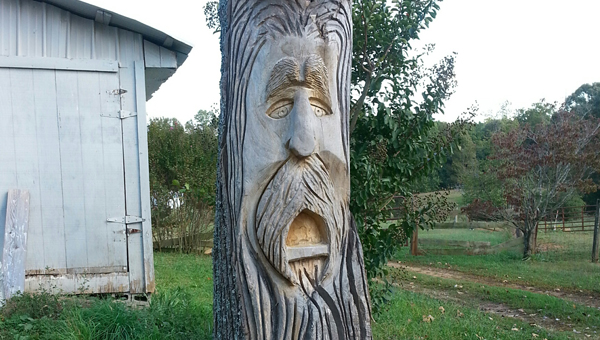 Cole Lumbus, a carved tree trunk by local artist Chris Carroll could soon be placed at Stearns Park as a tourist attraction. A project by Discover Columbus, Cole will be dressed up for holidays and have his own Facebook page to encourage residents and visitors to upload pictures with him. (Photo submitted by Jimmi Buell)

Downtown Columbus could soon have a new mascot to encourage tourism with this mascot having his own Facebook page.

Cole Lumbus is a tree trunk carved by local artist Chris Carroll who has agreed to donate the art to the town.

Cole Lumbus is part of Columbus’ Handmade In America and Discover Columbus project.

The Polk County Board of Commissioners met Feb. 23 and heard from Jimmi Buell with Handmade In America and Discover Columbus, who introduced Cole Lumbus to commissioners and asked permission to place the art in Stearns Park.

She said several years ago she visited Edisto Island and met Eddy Stow, where she saw the tree trunk had his own Facebook page. Buell said she visited Eddy on Facebook and has now been following him for years.

“He’s a tree trunk and he has more friends on Facebook than you do,” Buell said.

Locals of Edisto dress Eddy up for holidays, sporting events and special celebrations with Eddy being a supporter of local sports teams. Buell said the community has become emotionally invested and found a common bond through Eddy. And tourists love Eddy, too, Buell said.

“He’s become a family tradition,” she said. “Wouldn’t it be great if we could bring this kind of enthusiasm, free publicity and money to downtown Columbus? We can.”

Cole Lumbus is a tree trunk, carved by Carroll, who is the woodworking instructor for Tryon Arts and Crafts. Buell said a carving such as Cole Lumbus would normally sell for $1,500-$2,000, but Carroll is willing to donate the carving to the town for the public recognition that he carved it.

Buell said the Discover Columbus committee would like to place Cole Lumbus in a prominent location at Stearns Park, naming the far right corner if facing Stearns from Mills Street.

She said tourists and locals could take pictures with Cole and share them on social media and Cole will be dressed up for holidays and other events, such as the Columbus Fabulous Fourth, Tryon’s Blue Ridge Barbecue Festival and rallying for the Polk County Wolverines. Cole Lumbus will also have a Facebook page so people can interact with him and future promotions could include Cole having his own blog, Buell said.

The Discover Columbus Committee will be responsible for Cole’s maintenance and dressing him, Buell said, and there is no cost to the county, although the county will reap economic benefits Cole will bring to Columbus and the county.

Buell said studies have shown community art creates attachment to one’s community and benefits economic development. The Knight Foundation’s Soul of the Community initiative surveyed approximately 43,000 people in 43 cities and found that the “aesthetics of a place – its art, parks and green spaces,” ranked higher than education, safety and the local economy as a “driver of attachment.” According to Linda Slodki, Mt. Airy Art Garage, the arts are a highly cost-effective way of driving economic revitalization in urban areas, Buell said.  However, art not only spurs economic development but also creates oneness and an emotional investment in their community, said Buell.

Commissioners agreed Cole Lumbus will be a great addition to Columbus but wanted to ensure the Polk County Board of Education approves the mascot first since the school system owns Stearns Park. The county leases the park for $1 per year from the school system.

Commissioners directed county manager Marche Pittman to speak with the school superintendent and assuming no objections from the school board, the county is scheduled to approve allowing the placement of Cole Lumbus at Stearns Park at its next meeting scheduled for March 16. 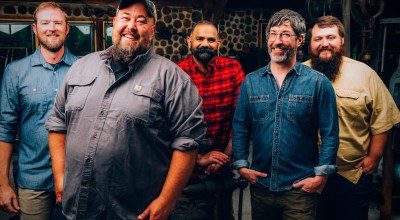