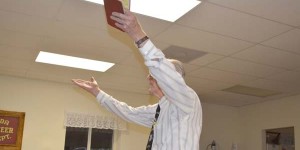 Several Saluda residents made it clear they are not happy with city council’s decision to remove off-premise church signs and allow alcohol at McCreery Park events.

Around 60 area residents attended and were given a chance to make general comments and ask questions of council following presentations made regarding recent city projects by employees.

Tangie Morgan said there’s been so much discourse in Saluda from the veteran sign controversy and now other signs being taken down. She said she would like to see city council actually listen to the people instead of making jokes and cracks on the street. She also said some Saluda people are outside the city limits but they are still citizens of Saluda and council needs to respect that. The loss of several employees who have resigned recently also needs to be addressed, she said.

“I just wish city council would actually listen and listen to all of Saluda,” said Morgan.

Henry Vegter stood with his Bible in hand and asked everyone who is in favor of Christian signs to stand up. Vegter spoke about a group of people in Missouri who founded a town and named it Liberal, where churches were not allowed. He said they boasted it was the only town of its size without priests, preachers, churches, God, Heaven or Hell. Vegter said there was little else but the Devil and Hell there.

“Liberal was a failure,” Vegter said, “and you know Saluda can be a failure the same way.”

Prior to public comments, engineer Jonathan Hollifield, city administrator Erny Williams and zoning administrator John Cannon gave presentations on recent projects. Hollifield spoke of a capital improvement plan for the city’s water and sewer system, which is needed to apply for grants to upgrade the system.

Cannon spoke on the planning board’s recent work on the sign ordinance, which includes a study looking at how other towns address sign regulations through ordinances. 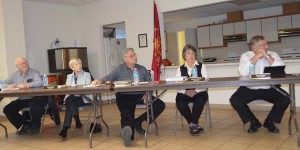 “The U.S. was founded in God we trust and I don’t want to be like other towns,” Barber said.

Barber said other towns have given up morals and values. He said he was raised in Saluda his entire life and remembers a time you could walk down the streets and there was no beer drinking and people running up and down the streets in the middle of the night.

On veteran signs, Barber said his son is a U.S. Marine and is serving his country so “we can put up signs.”

“Many have fought and died for our country,” Barber said.

Barber said veterans can’t put up signs in Saluda yet signs for city council are allowed so we can vote for them.

“This whole situation is ridiculous,” said Barber. “The Friendship Church sign has been here for over 100 years. It’s a staple of this community.”

He said he prays that each and every one of the people there Thursday will stand firm and let God decide.

Barbara Hipp said she thinks churches are getting singled out and it seems like the city is doing everything it can to get God out of Saluda.

Hipp showed directional signs that are still in Saluda telling how to get to a resident’s house.

“I want to know how it’s so important to get to their house, but not God’s house,” said Hipp.

Sharon Hipp said she’d been in Saluda over 35 years and when council sets limits on the people, “I don’t think we like it.”

She said council works for the people and she doesn’t like that residents don’t get to speak at meetings before items come up on the agenda.

Sharon Hipp invited anyone with church signs to place them in her yard since she owns to the middle of the road in downtown. She said those signs have been in Saluda and what’s been here is not illegal.

“I don’t understand why people come in and want to change Saluda,” Heatherly said. “Wouldn’t it be easier for them to go back home and then to change?”

Heatherly also brought up drinking in McCreery Park. She said if people want to drink beer in their homes that’s their business.

“If our kids want to play in the park you shouldn’t force drinking on them,” said Heatherly.

Pastor James Shields, with Piney Grove, said he’d heard a lot of talk Thursday night about historic, yet one of the churches in the area probably has more history in the area than the town itself.

“Lord knows where (the sign) is at,” said Shields.

He asked if someone comes into town and wanted to go to Piney Grove or Fork Creek or Friendship Church, how will they find it?

Grace Missionary Baptist Church Pastor Robin Morrow said his church sign was chosen to be taken up first and wanted to know how the city decided which signs to take up when.

Cannon said he started in the city’s downtown historic district and Grace Missionary was included in that district. Cannon said he went through indiscriminately and removed all off-premise signs. Cannon also said at the same time the state came and removed many signs as well. The city has signs for people to pick up, while Cannon said any signs the state picked up are discarded.

The signs were removed that did not meet the city’s current ordinance on signs and meanwhile, the city’s planning board is working on amendments to the sign ordinance.

Morrow said there’s many other signs that are the same size of ones removed that were not removed. Cannon respsonded there were some sigs he couldn’t physically move.

Morrow said “it’s a slap in the face for people to treat veterans without the respect they deserve.”

“I can’t believe a town would hold up any questions about a veteran,” Morrow said.

He also said children are being overlooked in Saluda. He said young people are going to turn to alcohol and drugs because there’s nothing for them to do in Saluda.

Cindy Morrow said she was shocked when the city took up their church signs. She also said the city did music in the park and “you’ve thrown the drinking thing right out in front of (the children).” She said children can’t even get on the playground because the city has put an age and time limit on them.

Dotty Eargle said her complaint is about noise. She said she would love to see the city’s noise ordinance enacted and enforced because a lot of noise is being caused by alcohol drinking being allowed at these establishments.

“And if y’all don’t know it, just spend the night at my house,” Eargle said.

Karen Bultman asked why the city did not hold a referendum on alcohol being served at downtown events.

A woman from the audience asked if those organizations got $1 million worth of liability insurance.

Baisden answered that they did pay for that much liability insurance, speaking of the Green River Games, and they also made a donation to the park for $500.

Dorothy Williams said she went to city council months ago saying alcohol in the city is wrong. She said she lives near McCreery Park and sees it and lives with it but nobody listens.

“Saluda has gone to the devil,” Williams said.

John Morgan told Cannon his first job seemed to be to remove the signs. John Morgan asked Cannon if those decisions were Cannon’s decisions or was he directed by someone.

Cannon said when he was hired he was asked to enforce the zoning ordinance without discrimination. Many other things have been enforced as well, said Cannon.

Barbara Hipp said the concerts do bother people, especially those who try to go to bed at a decent hour.

“I wouldn’t dare let my grand youngin’ go to that park and let them swing and see what goes on there,” Barbara Hipp said. “Ask these people how many nights they have not been able to sleep?”

Commissioner Lynn Cass responded eight nights from 7 – 9 p.m.; that’s how many Top of the Grade concerts there were this year.

“I know this is heated because of the signage,” Cass said. “Everyone has everyone’s best interest at heart.”

She said on the special permits on alcohol, people are not drinking and making all this noise in front of the children and drunks are not running and down the street in Saluda. On the veteran sign, she said, her father, brother and brother-in-law are veterans.

“The veteran sign has been very much misunderstood,” Cass said.

The sign was put up without a permit and it mimicked a state sign, which state rules prohibit.

“We’re not against veterans,” Cass said. “How can you be against a veteran?”