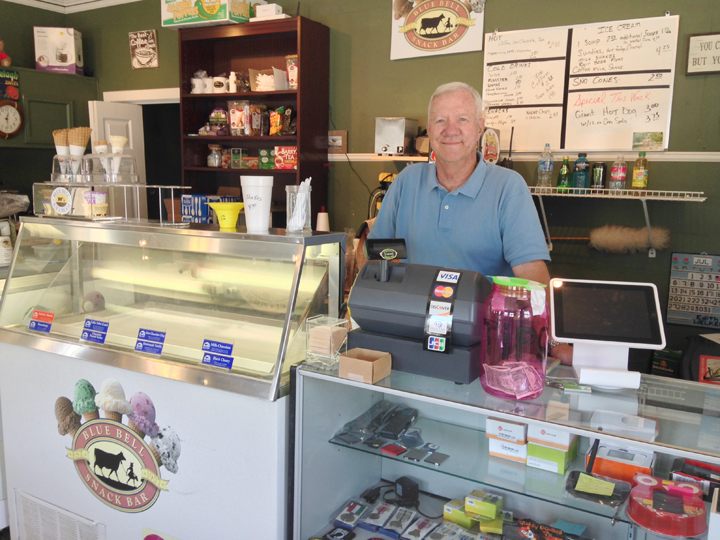 By Claire Sachse
Even though he has been in America for 55 years, Walker O’Duggan still lapses into a lilting Irish brogue during conversations with customers at his small shop on the corner at 163 N. Trade St.
“The more I talk about Ireland, the more the accent comes out,” he said.
Decorated with Irish memorabilia, flags, and signs, the shop offers ten flavors of Blue Bell ice cream, coffee, snow cones, and Nathan’s brand of hot dogs. No-sugar added ice cream is also available. The small shop is open from 12 to 5:30 p.m. Tuesday through Saturday.
Born in Belfast, O’Duggan came to America in 1959 when he was 13. He said he spent Christmas that year on the ship before arriving on Ellis Island in late December. His family moved to Richmond, Ind. where his parents found jobs in manufacturing. O’Duggan’s first job at 13 was selling ice cream from his bicycle.
At 17, O’Duggan enlisted in the Marine Corps, and spent 24 years traveling the world, visiting 124 countries, and completing a tour in Vietnam.
“What Irishman doesn’t like a fight?” he said, laughing.
In his mid-20s he became an American citizen. After retiring, he went into law enforcement. He relocated to Polk County from Florida in 1998 and married shortly thereafter.
O’Duggan opened his first shop in Columbus, moved to Tryon to another location on Trade St., and then to his current location in June. He said that he tries to model the shop on an Irish pub, without the alcohol, by selling a variety of non-food items such as no-contract Verizon phones, paintings and memorabilia.
“The American dream is still here,” O’Duggan said. “I’ve always had two or three jobs.” O’Duggan also has a mobile ice cream push cart that he takes to outdoor functions, music events, and children’s parties.