Pack named first female firefighter of the year in Tryon 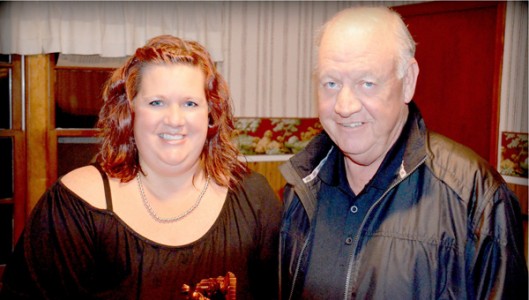 by Leah Justice
The Tryon Fire Department awarded its annual firefighter of the year award to Kim Pack, who is the first female recipient of the award.
The award is the Clarence G. Scoggins Firefighter of the Year, named after the longtime Tryon Fire Chief who was also Polk County’s first fire marshal. The annual award is voted on by members of the fire department, not including the chief, who does not participate in voting.
Pack received the firefighter of the year award for 2013. She serves as the department’s safety officer and lieutenant.
Pack was a volunteer firefighter for the Columbus Fire Department from 2000 to 2007 then joined Tryon in 2007. She holds a N.C. firefighter level II certification.
Pack is the first female to be awarded firefighter of the year in Tryon in its 51-year history.
She is also the first female to hold an elected office at Tryon, holding the ranks of lieutenant and captain.
Pack’s father, Ronnie Pack, received the same Clarence G. Scoggins Firefighter of the Year award in 1977.
The firefighter of the year was given during the fire department’s annual ladies night banquet on March 12 at Caro-Mi. The annual event brings the department together with retired members and elected board members who work with the department.
“It’s always a pleasure to bring those groups together in a relaxed environment,” said Tryon Fire Chief Joey Davis.  “Our department worked hard in 2013, especially with obtaining the medium rescue certification, so it was a great reason to celebrate. We also had many members of our department, and of our emergency service organizations in the county that we wanted to recognize.”
The keynote speaker was Jamie Black, assistant fire chief with the City of Kings Mountain Fire Department. Black and Davis worked together at Kings Mountain as fire inspectors from 1999 until 2006.
“Jamie has many years in the fire service both as a volunteer and a career guy so it was great to have him share stories and experiences with our guests,” Davis said.
Awards were presented to the following persons both in the community and volunteers with the Tryon Fire Department:
Outstanding service awards:
Lewis McSwain, Marche Pittman, Dr. L.W. Lassiter, Michael Crater and Polk County EMS.
Junior firefighter awards:
Savannah Hipp, Alexis McCraw and Daniel Walker.
Obtaining medium rescue certification recognition:
Marshall Lipscomb, James “Tank” Waters, Lewis McSwain, Zach Pace, Nick Edwards, Dave Kuether, Tommy Stott and Christian Miller.
Chiefs awards: Eric Freeman and Tommy Stott.
Proclamations on behalf of the Town were also read by Tryon Mayor Jim Wright to honor Polk County Sheriff Donald Hill and Kim Pack for their work with such programs as the RU OK program, the Polk County Toy Run and their joint work with Tryon Fire each year through the Polk County Community Foundation’s Seasonal Assistance Grant, which helps provide assistance for citizens in need during the winter months.
“It’s great to be with these folks and see those who do the work get recognized and rewarded,” Wright said.