Polk County Public Library to sponsor “An Era Of Excellence” 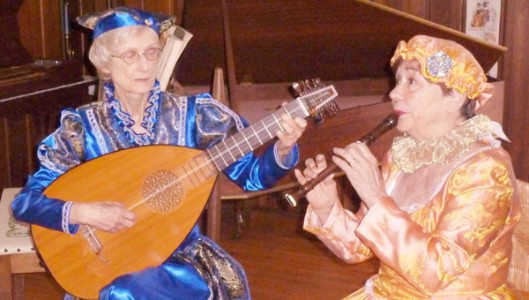 As a part of Polk County Public Library’s celebration of the 450th anniversary of the birth of William Shakespeare, Jeanette Comer and Helen Beverly have been asked to revive their program “An Era of Excellence.”
Dressed in costumes typical of the Renaissance, they perform vocally and on various instruments such as recorders, harpsichord and lute. Included in the program are selections from Shakespeare’s plays and commentary about Elizabethan times and the importance of music during the period, as well as examples of art of Renaissance Europe.
Comer and Beverly travelled extensively with “An Era of Excellence” for many years and were well-known throughout the northeast for their performances. They have also collaborated on many varied musical projects. Among their published works are Dix Chansons de Noël and Diez Canciones de Navidad, which include recordings of French and Spanish songs. They have also recorded background music for nationwide radio and television.
Comer now resides in Tryon and is active in the Foothills Music Club Inc. and Tryon Painters and Sculptors. Beverly lives in Virginia where she is a member of the music group, the King George Colonials.
“An Era of Excellence” will be presented Tuesday, March 25, at 6:30 p.m. at Isothermal Community College’s Polk Center in Columbus. Free copies of “A Midsummer Night’s Dream” will be available while supplies last. Sponsored by Polk County Public Library with a grant from the Polk County Community Foundation, the program is open and free to the public. It is presented as part of “Whole Lotta Shakespeare Goin’ On” in partnership with other regional public libraries and local community organizations. More information is available at http://polklibrary.org/kids/shakespeare/ or by calling the library at 828-894-8721.