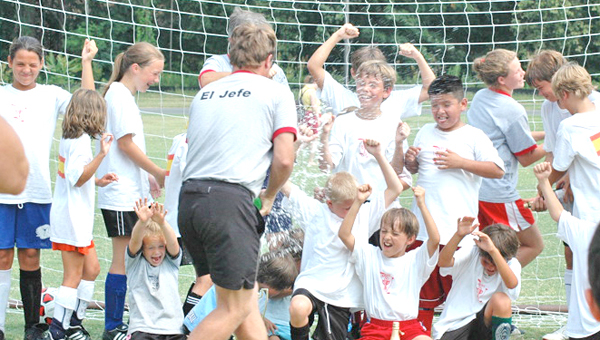 This free event for boys and girls in grades 3-8 (ages 8-13) will take place pending grant funding. Applications will be available May 1 at the town halls in Tryon, Columbus and Saluda as well as at Polk County Middle School.

The mission of the camp is to teach fundamental soccer skills and create a global awareness by exploring other countries’ heritages.

This year, defending champion Egypt will take on teams from South America, Asia and Europe.

Each day, players will learn about the country and then train in their style of play.

The camp ends with a round robin tournament and picnic on Saturday. Enrollment is limited to 80 players on a first come-first serve basis.

The brainchild of PCMS soccer coach George Alley, the Kirby Cup was inspired by a local pick-up soccer game that has been going on in Polk County for more than 30 years.

On any given Sunday, one can find participants of diverse ages and backgrounds.

The cross cultural, multi-generational nature of the game inspired the creation of the Kirby Cup, which has been generously funded by the Kirby Endowment at the Polk County Community Foundation every year. So, after serving more than 40 coaches and 700 players over the past nine years, Happy 10th Birthday Kirby Cup.