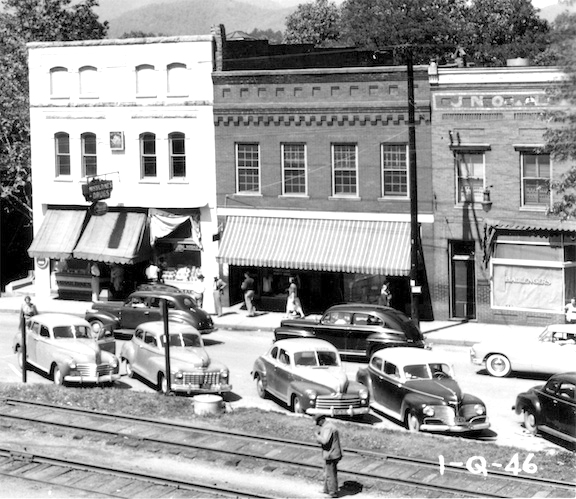 The Missildine Drug Store and adjacent buildings in the 1940s. (photo submitted).

After purchasing the famed Missildine Drug Store building before Thanksgiving last year, Gayle and Scott Lane stand waiting to close the deal on purchasing the former drug store’s adjacent Tryon Federal and Jackson buildings.
“They are beautiful buildings and have so much potential,” said Gayle Lane. “It’s exciting to be inside and look out the windows at Morris and downtown Tryon. Now we just want to make them viable again.”
The Lanes expect to begin facade and interior renovations later in the year, but said they will take their time with the updates.
The three iconic Tryon buildings at the corner of N. Trade and Oak streets have remained unoccupied since Tryon Federal Bank moved to its N. Trade St. headquarters in 2006.
The Missildine building was built in 1913 after the first Missildine drug store burned. For many years Missildine’s Drug Store was a popular gathering place. Ernest Ellwood Missildine (d. 1942), the pharmacist, served several terms as mayor of Tryon. Missildine and Dr. Earle Grady opened the pharmacy in 1896, but two years later he became the sole owner.
Major William Strong, who worked on several prominent Tryon buildings, oversaw the rebuilding of the drug store following the 1913 fire. The building’s second story contained offices and a large hall, which accommodated several community organizations including the Masonic Lodge and chamber of commerce. Dr. Grady, an early Tryon physician, also had a second story office in the building. In 1967 the building was purchased by Mrs. F. P. Bacon to house the Blue Ridge Weavers, which remained through the late 20th century before relocating to Pacolet Street. In the late 1990s, the building was remodeled, along with the two adjacent buildings, to house Tryon Federal Bank.
Scott Lane said one of the main focuses they have with plans are to replace the combined frontage look with three separate facades that replicate the way things looked back in the 50s and 60s.
“It’s right smack dab in the middle of town and it needs to be viable and part of the community,” Scott Lane said of the Missildine building and its prominence in Tryon.
“If we can make those buildings contributing members of the town again, that helps everyone up and down the street because tax credits are available from the federal government and available from the state of North Carolina specifically for historic districts.”
Tryon economic director Crys Armbrust said of particular architectural significance and historic note is the 1913 Missildine Pharmacy building. Many notable celebrities and locals frequented the shop including, among others, F. Scott Fitzgerald, Lady Astor and David Niven.
“The buildings’ renovations are expected both to enhance Tryon’s upcoming bid for Historic District designation and to bring new economic vitality to Tryon’s Central Business District (CBD),” Armbrust said.
The process of achieving a national historic district designation requires an architectural survey cataloging every building in Tryon’s CBD. The town completed this architectural survey, with help of Clay Griffith and funding from a grant provided by the Polk County Community Foundation to the Tryon Downtown Development Association.
The architectural survey was later used to obtain the North Carolina Economic Innovation Grant from the North Carolina Department of Commerce after the town was named a Small Town Main Street (STMS) community. The town has since received two grants from STMS totaling $200,000.
Two site visits have also been completed to determine the range of the historic district. Tryon’s planned historic district is outlined from A Better Deal at 354 S Trade St. to Bill’s Jewelry 55 S Trade St. The next piece of the process is for the town to be nominated by the State Historic Preservation Office to a national study list.
To be considered a contributing building within a historic district, a location must include original entrances and/or original second floor façade windows.
Armbrust said these three buildings are not the last piece of the puzzle but their renovation would make a significant enough impact to make the town a strong candidate for the study list.
Achieving the historic designation allows the town to put up a sign on the interstate that publicizes the district and hopefully brings more travelers to the area, Armbrust said.
Gayle and Scott Lane certainly have a heart for the history of Tryon. The couple moved here about two and a half years ago and purchased the former Stone Hedge Inn, Scott said.
“We can create some extra energy in Tryon – its not necessarily just the last place you come to live, but a place you can come in the middle of your life or the beginning of your life to start a family,” Scott Lane said.