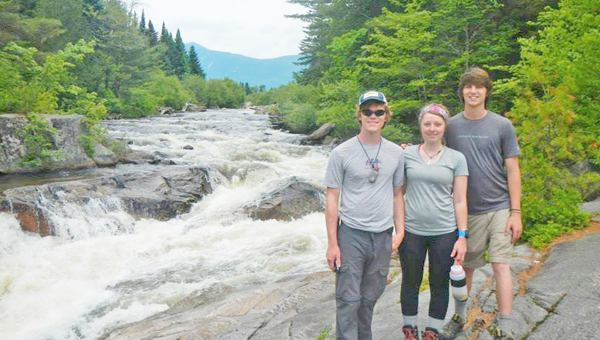 Dylan Walker, Austin Knott and Danielle Phillips near the end of their journey. (photos submitted)

When Dylan Walker and Austin Knott first met at the age of nine in Tryon, they had no idea a decade later they would accomplish a hike that only one in four who attempt it successfully completes.

Walker and Knott both moved to Polk County from different areas when they were 9-year-olds. The two became fast friends. Both graduated from Polk County High School, and decided last year to hike the Appalachian Trail.

More than 2,100 miles and almost six months later, Walker and Knott along with friend Danielle Phillips and two dogs completed the trail.

They started their adventure on June 21 at Mount Katahdin, Maine after leaving Tryon on June 13. They traveled as lightly as possible, carrying backpacks, food, hammocks, tarps, cook stoves and sleeping bags. Both dogs, each rescues, carried their own food and gear in packs.

Walker said they would usually set a goal of how much to hike each day and would stop when night fell. They received needed gear and food by mail and made occasional stops at hostels or sometimes a hotel for a shower.

They successfully completed the trail from Maine to Springer Mountain, Ga. on Dec. 18.

The Appalachian Trail is one of the longest continuously marked trails in the world,
measuring roughly 2,180 miles. The trail goes through 14 states along the crests and valleys of the Appalachian Mountains from the southern terminus at Springer Mountain, Georgia to the trail’s northern terminus at Katahdin, Maine.

It is estimated that 2-3 million people visit the trail annually and approximately 1,800-2,000 people attempt to “thru-hike” the entire trail. One out of every four hikers who attempt a thru-hike successfully completes the trail. Most thru-hikers walk north, starting in Georgia in spring and finishing in Maine in fall, taking an average of six months.

Maryland and West Virginia are the easiest states to hike, while New Hampshire and Maine are the most difficult.

The trail was completed in 1937 and is part of the National Park system, maintained by many public and private agencies and clubs.