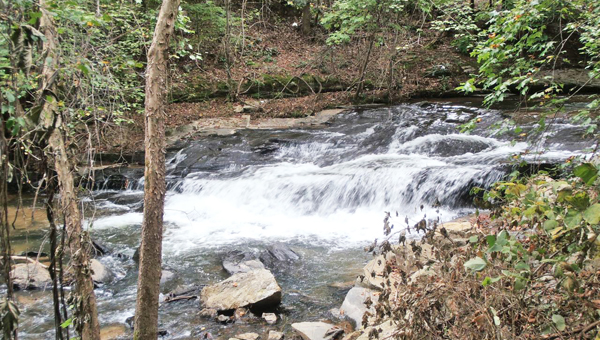 Pictured is Siller’s Falls along the newly completed Vaughn Creek Greenway in Tryon that should be open to the public in a couple of weeks. An official opening is being planned by the Tryon Parks Committee in early spring 2014. (photo submitted by John Vining)

Area residents and visitors will soon have another trail to enjoy as Vaughn Creek Greenway is set to open to the public in a couple of weeks.

Although work to the trail was slowed this summer because of excessive rains, the work did meet a grant deadline, which was today, Sept. 26. Most of the work on the trail to meet the deadline was completed last week.

Obtaining the land and grants to open the trail has been ongoing since around 2005. Tryon purchased the almost 25 acres of land with grants from the N.C. Clean Water Management Trust Fund and the Marjorie M. & Lawrence R. Bradley Endowment Fund of the Polk County Community Foundation.

Work on the trail was accomplished through a $95,000 grant from the N.C. Division of Water Resources with volunteers working on the trail system several times to clear out growth.

John Vining, Polk County Cooperative Extension director and chair of the Tryon Park’s Committee, led the project and said many residents have worked hard over the last eight years to see it completed. He also said the project received assistance from the Carolina Mountain Land Conservancy.

Vining said the summer of 2013 was not the time to attempt an outdoor construction project because of the rain, but in hindsight the situation may have been a blessing in disguise.

“We are seeing wet weather springs that we did not know existed,” Vining said. “Our contractor was able to improve the trail because he was able to install better drainage that wasn’t apparent in the five previous drought years.”

The trail is planned to one day be part of a permanent public greenway that will connect Ziglar Field with the existing Woodland Park and a proposed Lanier Park.

The existing Vaughn Creek trail is an approximate ¾ mile that runs along Vaughn Creek and is relatively flat. The trail starts on New Market Road and ends along property owned by Southern Railroad.

One of the best features of the trail is Siller’s Falls. A photograph of Siller’s Falls exists from around 1915 and was reproduced as a postcard by the parks committee in 2010 when they held an open house for the greenway.

“If you have never seen this portion of Vaughn Creek, you are in for a real treat,” Vining said. “Sections of the stream look more like a mountain stream with large boulders and attractive wildflowers.”

Vining said the removal of non-native plants allowed native plants in the area to flourish. He said after being cleared, one area has Iobelia, Carolina Jessamine, blood-root and trillium and he has also seen a larger population of trout lilies growing along the trail than anywhere else he knows of in the county.

A sign has been ordered to mark the entrance to the trail near the bridge on New Market Road.

The latest work included the contractor seeding an erosion mix to help with areas where bare ground exists. Once that is growing, the trail should be open to the public, according to Vining. The wood from fallen red oak trees will be cut into lumber for either benches along the trail or donated to Polk County High School for projects.

The Tryon Parks Committee is waiting until early spring to have an official opening ceremony of the trail.