Learning on a shoestring 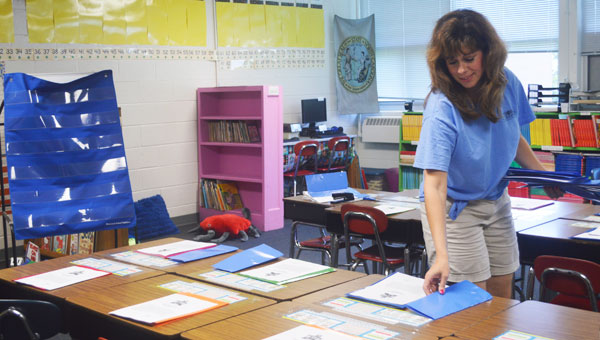 Michelle Richardson is returning for her first year back in the classroom after taking several years off to raise her daughters. Richardson is seen here passing out folders to each desk in her second-grade classroom at Polk Central. (photo by Samantha Hurst)

When doors open to Polk County classrooms Monday, Aug. 26 teachers and staff expect to welcome about 2,500 students into the system, all while facing financial cutbacks, according to local education leaders.

Superintendent Bill Miller said Polk County Schools’ Board of Education worked hard during this recession to make smart choices so the system would not have to lose key positions.

“Our board is having to do all kinds of things and I’ve been going around meeting with schools and teachers to talk with them about what we’re doing to meet our budget,” Miller said.

In this year’s state budget, funding for teacher assistants was cut 21 percent, Miller said. Next year, Miller said his board has been told to expect a cut of an additional 20 percent.

“So by the end of next year, money for teaching assistants will effectively be cut 41 percent,” he said. “We’re trying to struggle through it and do what we can. Most people who have been around a long time remember when we had teacher assistants in every classroom. We’re now down to K-1.”

A press release from Gov. Pat McCrory’s office said instead of focusing on teacher’s assistants the state wants to hire more full-time teachers. McCrory’s plan is to hire 1,800 more full-time certified teachers throughout North Carolina over the next two years.

Miller said the system saw the reduction in teacher assistants coming for several years, so with attrition the system didn’t replace those positions.

This prevented the system from having to hand out “pink slips,” but this year when a new employee is hired for a position they will make 10 percent less than if they had started in the same position last year. Miller said the board hopes that would further prevent any staff from being let go in the future.

Miller added too that instructional supplies were cut 50 percent in this budget and textbooks 75 percent. While Miller said he feels most of Polk schools have textbooks in good condition, this will be more of a problem in the long run as those books wear out.

According, to the governor’s office McCrory wants to see more emphasis placed on digital learning. In his budget, McCrory said he called for $43 million in additional funding over two years to promote technology in the classroom. Lottery funds are directed to support the purchase of reading tablets and technology to help address third grade reading achievement.

Miller said he is concerned a reduction in staff and teaching tools will become overbearing as teachers work to meet higher testing requirements.

Throughout the recession Polk County Schools experienced the good fortune of a committed community and county commission, Miller said, which kept the system from having to make harsh cuts.

“In our case we are just so fortunate here that our commissioners have helped us and what has really helped us the last two years is not having a winter, which cut down on electricity costs,” Miller added.