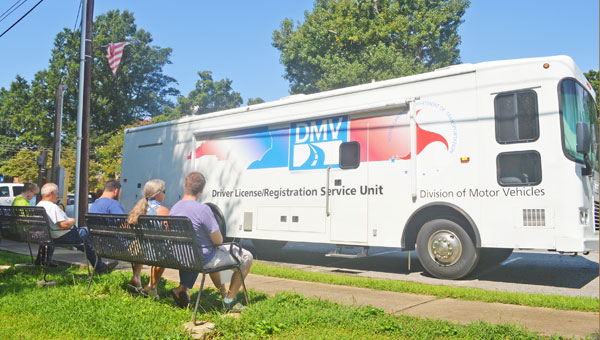 The Polk County Board of Commissioners met Monday, Aug. 19 and heard from Holbert who said Phillip Lewis with the N.C. Department of Motor Vehicles notified him that Polk County was accepted to receive an in-house driver’s license office in place of the current mobile unit that comes to Columbus.

Holbert said two of his top priorities when running for commissioner were to get a driver’s license office and license tag office in Polk County. Currently, Polk has no tag office. A mobile driver’s license unit comes to Columbus three Thursdays a month.

Resident William Harper sat on a park bench outside the mobile DMV Thursday, Aug. 22 waiting his turn to purchase a new license. He said luckily the day was nice, but that’s not always been the case.

“Sometimes you’ll see people waiting in their cars because its raining so hard and that makes it difficult to know who’s turn it is,” Harper said. “About two years ago I stood out here waiting for about 45 minutes.”

Another resident waiting with him said she’s tried to come by several times to get a book to study, but gave up and printed information from the Internet when the mobile unit didn’t show up. She said, pointing at a singular step about a foot off the ground, that she’s concerned it would be difficult for someone with disabilities to even get inside the unit.

Polk County commissioners have said they envision a combined tag and driver’s license office in the current Polk County Early College that was formerly the Polk County Library on Walker Street in downtown Columbus.

The county has agreed with its school system to borrow up to $800,000 to move and renovate a building so the early college might be moved. School officials have asked the county to move the program into a larger building closer to the high school so more students can participate.

A closer location would also give students in the program access to the school campus. The school system has been in negotiations to purchase a building near the high school.

There is not currently a date set for the permanent office to open in Polk County. Until the office opens, the mobile unit will continue to be available from 9:30 a.m. to 3:30 p.m. three Thursdays per month. Other department of motor vehicle offices are located in the nearby cities of Hendersonville and Forest City five days per week.

Teenager Cody Halford was waiting his turn outside the bus as well. He said he came to take his driver’s license test in Columbus versus driving to Forest City or Hendersonville because he thought it would be more convenient. Halford said he thinks it would be easier for other teenagers like him if a permanent office was available.

contributed to this article