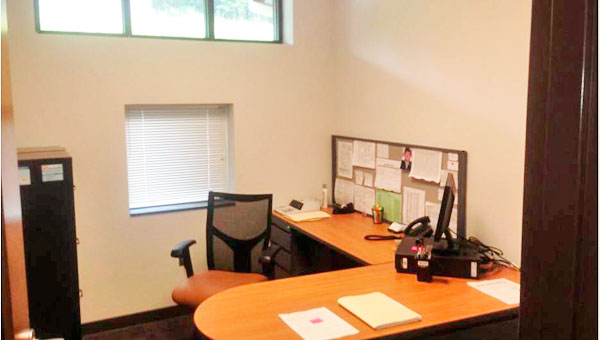 An office in the Polk County Department of Social Services. Issues with the HVAC and sewer have caused commissioners to seek a consultant to determine how to make the building function properly. (photo submitted)

Polk County hired a special construction consulting firm to analyze its department of social service (DSS) building and provide a report to the county on its issues.

The county recently said it needs an independent specialist to not only advise the county on how to properly fix issues but to potentially be used as an expert witness if the county later decides to sue to recoup damages.

The DSS building was first brought up during open session by commissioner Ray Gasperson who showed pictures of the building and said, in general, although there are significant issues with the HVAC system, the plumbing and some aesthetics, the building is overall a good design.

At the county’s Aug. 5 meeting, county attorney Jana Berg reviewed the building’s issues and referred to it as a “train wreck.”

On Monday, Berg clarified her statement.

“When I used the term train wreck during that meeting, I was not referring to the building itself,” Berg said. “I was referring to the process by which we got there; all the contractual issues related to this particular construction project. Finally, I want everyone to know that while yes, there are some fairly significant issues with respect to this building, we’re working very hard to resolve them to the satisfaction of the county to ensure that the county taxpayers and citizens get what it was we paid for. “

Gasperson said he just wanted to show there are positives to the building and said he’s optimistic the county is going to find a solution for what problems exist.

Gasperson’s comments drew some criticism, particularly from commissioner Tom Pack, who said Gasperson is trying to downplay the building’s issues.

“Ray, it appears to me … you’re trying to downplay the issues we have in this building and make everything rosy,” said Pack. “We’ve got a lot of issues in this building.”

Pack read from the Aug. 5, 2011 minutes where, “Pack expressed concerns regarding the overall quality of the building given the number and often simple nature of issues associated with this project.”

“I had concerns then,” Pack said.

Pack continued with the 2011 minutes saying Gasperson then said he was convinced everything was 100 percent with the building and that the county would have a building that would last 50 years.

“Ray, you downplayed it then and we’ve got issues we still need to correct,” Pack said, “you’re trying to downplay it now. We need to get the thing fixed and quit playing politics.”

Resident and former commissioner Renée McDermott said it seems commissioner meetings aren’t to conduct the county’s business, but to disparage people who disagree with the majority and to jockey to get the majority’s spin and quotes in the newspaper.

“The DSS building presentation wasn’t put on the Aug. 5 agenda to discuss what to do about the building,” said McDermott. “The cures for the DSS building problems were known since before Ryan Whitson (county manager) left and before this board fired Mike Egan as the county attorney.”

McDermott said Egan was in the process of negotiating payment for the proposed cure that apparently has been sitting on the interim county manager’s desk.

“It took this board nine months to finally start doing something, anything,” said McDermott.

Pack said McDermott was right. When the new board came in, the previous board had started working on some of the fixes for the issues, but those fixes were the cheapest available, not the best for the building. Pack said on the sewer line issue, the former board wanted to install a system that would flush a certain amount of water ever so often.

“Well if the thing plugged up on a weekend and it continued to flush, it would flood the building,” Pack said. “Instead of digging up the line and fixing it the correct way, they wanted to put in a system that would take maintenance.”

Polk County is anticipating having to take up the current sewer line that runs through the building, which according to resident and DSS board member Debbie Arceneaux, will “be a mess.”

“Mr. Gasperson, I don’t know what cloud you’re on, but this building is a mess,” she said.

“So, there are people in this county that didn’t have something available to them because of the irresponsible work that was done on this building,” Arceneaux said. “It’s going to be a mess and I don’t think you understand how much of a mess it’s going to be.”

She said she feels somebody needs to be held responsible for the building.

The county has expressed concerns over whether or not the building can be Leadership in Energy and Environmental Design (LEED) certified as the county paid about $31,000 for it to be certified.

Commissioners also heard Aug. 19 that the county still has approximately $140,000 left in the project budget from its loan proceeds. The county obtained a $1.8 million loan for the building that was opened in December 2011 and immediately discovered there were issues, including the HVAC system not working properly, humidity issues because the building was not sealed properly and plumbing issues.

Commissioners Keith Holbert and Gasperson both said they want the issues, particularly the HVAC system to be fixed prior to the winter months. Last winter employees needed space heaters in their offices.

Holbert said it’s been insinuated that the DSS discussion last meeting was a barrage against former commissioners.

“When I gave the slideshow last week I never mentioned blame,” Holbert said. “My sole intent with this was to let the citizens of the county know what we’re into and why we’re doing what we’re doing to fix it … It makes no difference what was done; it’s whether it gets fixed properly or not.”

“It was very strange then that you held that discussion, apparently seeking legal advice, in open session,” McDermott said. “Why do that? Was your primary goal to publicly discredit Ray Gasperson, Ryan Whitson and me? To put inflammatory headlines, and misleading information, in the newspapers?”

Commissioner chair Michael Gage said “it’s been fun being accused of not working.” He said since he was sworn in last December, he was told there was a big mess out there and he’s been working hard ever since to resolve the issues.

“So the person that was accusing us of blowing it off, I don’t know what they were thinking,” Gage said.

Gage said the board has been working hard on this and a lot of issues.

“We do it because we love our community, we believe in the system that we have and I appreciate everybody on this board,” Gage said. “Anybody that wants to accuse us of not doing our job, they can take a hike.”

The Tryon Police Department is asking the public to watch for suspicious activity around closed businesses and vacant homes after... read more