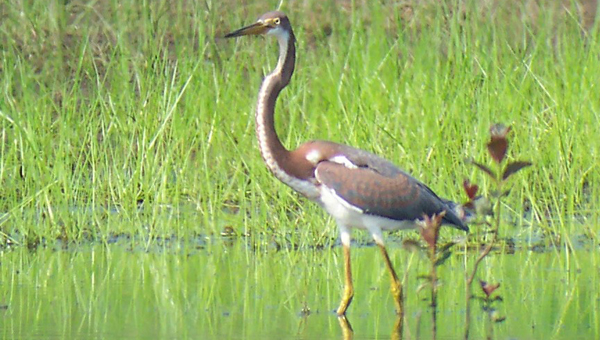 There’s an unwritten rule many of us adhere to and that is, “if the weather’s bad, go out birding!”

Yes, I know this sounds a little uncomfortable and even a bit irresponsible, but that’s keen birders for you.

Despite the standard spring and fall migrations most people are familiar with, there is bird movement at most times of the year and with adverse weather conditions, this can indeed become very apparent. Let’s just take a very recent example of this very phenomenon.

Think back to early July, not the birdiest time of the year by any stretch. All of our local birds have typically quieted down after a successful breeding season and not much else seems to be going on. Continuous downpours that seem to occur on a daily basis, however, have typified this year. Despite our complaining about the weather, the non-stop damp conditions have produced some outstanding shorebird habitat in some of our wide river valleys.

Rivers have burst their banks and flooded the fields resulting in near perfect water depth for many wading birds. This summer has already produced Little Blue and Tricolored Herons in the mountains and an excellent selection of shorebirds, including Baird’s and Buff-breasted Sandpipers and even a stray Marbled Godwit. More normal are Greater and Lesser Yellowlegs, Least and Solitary Sandpiper and Wilson’s Snipe.

Service Animal Project (SAP) was conceived in conjunction with the Foothills Humane Society in 2012. Ann Goodheart, a volunteer at... read more