Service Animal Project (SAP) was conceived in conjunction with the Foothills Humane Society in 2012. Ann Goodheart, a volunteer at FHS, along with Sev Bennett 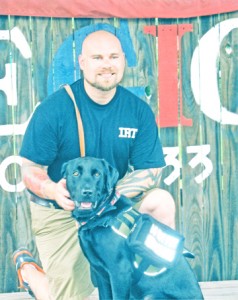 Winston and his owner at the American Legion Hall. (photo submitted)

established the organization after research into pairing service dogs with soldiers in need. They contacted K9s for Warriors in Florida, an accredited organization that trains dogs to be PTSD (post traumatic stress disorder) service dogs.

The dogs assist our warriors in all these areas. Because they are considered certified medical equipment, they must be allowed in public places. These sensitive, trained animals are highly tuned  to their owner’s emotions, moods and personalities.

To date, Service Animal Project has chosen five dogs from the FHS and sent them to Florida after completing the first level of basic training while using foster homes in Polk County. Winston, Drifter, Lilly, Onyx and Jet have been successful in this training, which consists of obedience, socialization, manners and high confidence levels.

Ambrose Mills, a member of the American Legion Post 250 in Tryon and his wife, Jeanne, transported the first dog, Winston to Florida. After further training, Winston was united with his permanent owner. Others have followed.

SAP and K9s for Warriors receive no government funding, but are funded in part by the American Legion Post 250, along with private donations. This year’s Legion Auxiliary spaghetti dinner proceeds will go toward this worthy project for soldiers with PTSD on Aug. 31 at 5 p.m.. Those attending can either dine in or take out.  The American Legion Hall is located at 43 Depot Street in Tryon.

A new show with an emphasis on raw materials is scheduled to open on Friday, Aug. 23 at Tryon Arts... read more