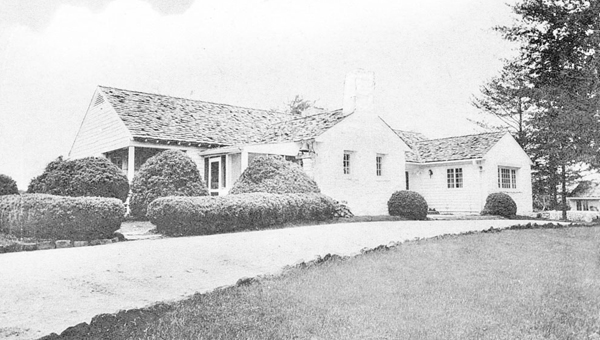 An old postcard showing Little Orchard, the Tryon home of Mrs. and Mrs. Maurice (Lefty) Flynn in the 1920s and 1930s. (photo submitted)

This fall, the Tryon Fine Arts Center, through a grant for a projector from the Polk County Community Foundation, will be showing a series of films that have one unifying association – the Town of Tryon. The series will be held biweekly on Tuesday evenings beginning Sept. 17.

A number of celebrities visited Tryon in the 1920s, 30s and 40s, many of whom were connected, in one way or another, with Hollywood. Mr. and Mrs. Maurice B. Flynn were at the center of this social scene.

Maurice was born in Connecticut and attended Yale University, where he played football and, according to legend, acquired the nickname Lefty for being a left-footed kicker.

In 1913, while still a student, he married a socially unacceptable chorus girl and, even though the couple split up after just 11 days, he was expelled from the university because of his indiscretion.

In 1916, Lefty marched down the aisle again, this time with Blanche Shove Palmer, with whom he had two children, including a son, John “Bud” Palmer who earned fame as a professional basketball player and as a sportscaster. Lefty moved to Hollywood in 1919, where between 1920 and 1927 he appeared in heroic roles in more than 40 silent films.

While still an actor, Lefty and his third wife, Nora Langhorne Phipps, purchased Little Orchard, a residence that still exists in Tryon. Tryon had been previously visited by members of the Langhorne family from Virginia, of whom the most notable member, Nancy, found her fame and fortune in England, becoming Lady Astor and the first woman member of the British Parliament.