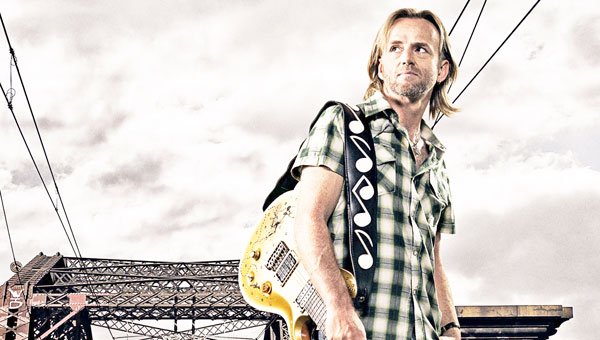 According to The Times of London, Australian blues/ roots artist Geoff Achison is “Possibly one of the most gifted musicians to arrive on the scene… His playing verges on the miraculous.”

Growing up in the small town of Malmsbury in southeastern Australia, Achison developed a passion for American blues music and taught himself to play on a beat-up instrument he discovered ‘under the stairs’ of the family home. Achison began playing music professionally in his father’s dance band at the age of 13.

He switched to bass at 15, playing mostly jazz. In his early 20s, he moved to Melbourne and was hired as lead guitarist with bluesman ‘Dutch’ Tilders. He formed his own band in 1995 and began travelling internationally. Achison has since toured the USA, UK and Australia many times releasing over a dozen albums. Along the way he has won several awards including the ‘Albert King Award’ in Memphis and Australia’s ‘Chain’ blues award for best band.

In 2011, Achison made Truefire’s “100+ Gifted Guitarists You Should Know” list and was named ‘Official Patron’ of the Melbourne Blues Appreciation Society. He lives in Melbourne, Australia and continues to record and tour regularly.

Martin Anderson, Music Director for WNCW radio in Spindale, N.C. says, “Achison’s 2009 album One Ticket, One Ride was the No. 1 pick among WNCW Blues fans. We enjoy having him and Bramblett stop by for live sessions here on a regular basis.” Achison, Steele and Hendershot will be live on WNCW at 4 pm on Friday, Sept. 6.

The Achison and Bramblett concert, sponsored by Lichty Guitars, begins at 8 p.m. Friday, Sept. 6. WNCW 88.7 FM is media sponsor for this event. General admission tickets can be purchased either online at www.tryonarts.org or at the Tryon Fine Arts Center box office by calling 828-859-8322.

Tryon Fine Arts Center, located on Melrose Avenue in the town of Tryon, has been a center for participation in the visual and performing arts for more than 44 years attracting a diverse range of audiences.