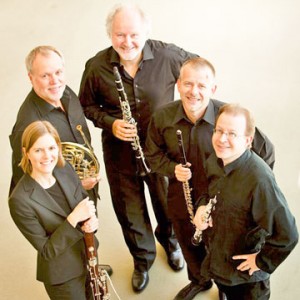 The group performs across the globe and has worked with leading conductors such as Herbert von Karajan, Leonard Bernstein, Sir John Barbirolli, Claudio Abbado, and Simon Rattle, to name a few.

During this 21-year period they have had the same group of musicians until only recently. Founding bassoonist Henning Trog recently retired and was replaced by Marion Reinhard. She, like the others, is a long-standing member of the Berlin Philharmonic Orchestra and brings extensive experience to the ensemble.

The Berlin Philharmonic Wind Quintet was hailed by England’s Manchester Evening News as “arguably the best ensemble of its kind in the world.” The group brings a wide range of expression, tonal spectrum, and the ability to combine their five unique sounds into a collective smoothness.

Their repertoire covers the long-standing wind quintet literature, but also includes works for enlarged ensembles, such as the sextets of Janacek and Reinicke or the septets of Hindemith and Koechlin. They even break into the jazzy music of Gunther Schuller, and Kazimierz Machala’s “American Folk suite.”

In addition to their worldwide concert appearances they are seen and heard on television productions and radio broadcasts throughout Europe, Asia and North America.

The quintet works as teaching coaches with youth, giving chamber music workshops and instrumental instruction in many countries.

This exciting group will perform at the Tryon Fine Arts Center on Tuesday, Feb. 25, 2014 as the third concert of the Tryon Concert Association’s 59th season.

Short-Vollmer wedding held in Raleigh May 18

Lauren Elizabeth Short of Raleigh, N.C. and John Michael Vollmer, also of Raleigh, were married on May 18 in Fletcher... read more