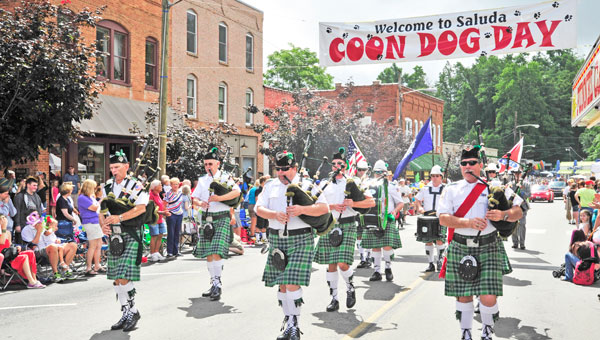 A litter of pups sleeps as crowds of festival-goers “ooh” and “aah” over them outside of Saluda Elementary School during the 50th annual Coon Dog Day held Saturday, July 6 in Saluda. (photo by Mark Schmerling)

The City of Saluda has Coon Dog Day figured out after reporting a $6,410 profit following the 2013 festival held in July.

The Saluda Board of Commissioners met Monday, Aug. 12 and reviewed the final numbers on the festival, with this year marking its 50th year.

The city was thanked by a few residents who spoke on the hard work city employees do for the festival.

“It’s paid for itself this year,” Williams said as he thanked Morgan and city staff. “It’s a long process for a one-day activity but it actually turned out pretty good this year.”

Thick blocks that made up a retaining wall at the Green Creek Fire Department are seen here smashed against one... read more