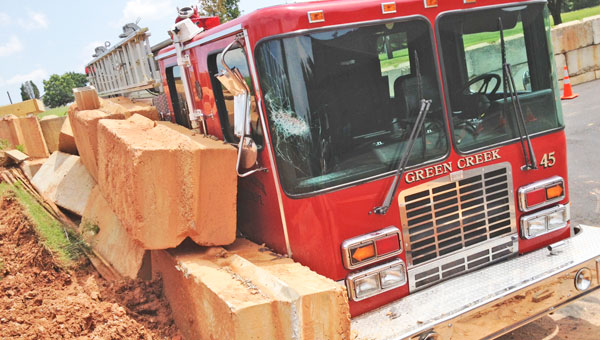 Thick blocks that made up a retaining wall at the Green Creek Fire Department are seen here smashed against one of the department’s fire engines with crumbling red clay falling in behind them. Another round of thunderstorms that moved through the area over the weekend brought several inches of rain each day. Friday, Aug. 9 Tryon’s water plant recorded 1.68 inches of rain. On Saturday, Aug. 10 the plant saw 1.15 inches of rain and on Sunday, Aug. 11 the area got 1.12 inches of rain. See the full story on page 3.

During the heavy rains, thunder and lightning on Aug. 10 Green Creek Volunteer Fire Department was dispatched at 8:31p.m. to a reported lightning strike/possible structure fire at 474 Chesnee Rd.

Upon returning to the fire station firefighter Lambert Ridings advised Chief Michael Herman that the retaining wall behind the fire department had fallen during the storm.

The wall also landed on a fire engine causing damage to the fire truck.

Chief Herman has met with the insurance company to determine how bad the fire engine has been damaged.

Cones have been placed in the back parking lot area of the fire department in an effort to keep everyone away from the unstable ground.

The department is hopeful the area won’t have any more heavy rains before it can get everything fixed.

Even though heavy rains, intense lightning and high winds battered the area Saturday night there were no warnings issued by the National Weather Service.

Carolina Horse and Carriage, out of Landrum, gave visitors to the Tryon gallery Trot tours through downtown Tryon on Saturday,... read more