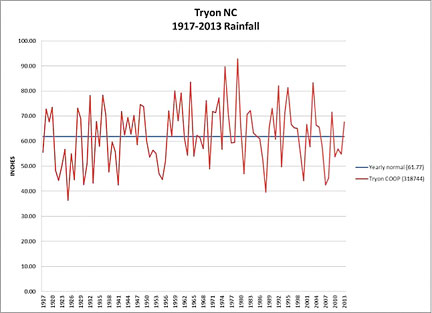 One thing everyone has in common is weather.

The group belongs to the nationwide Community Collaborative Rain, Hail and Snow Network (CoCoRaHS). Along with the National Weather Service COOP Station in Tryon, these individuals log precipitation that occurs at their location, usually a home or farm, but also a school and a business too. This past July was a good example of what the network accomplished.

Several stations reached or exceeded the normal precipitation for the year of 61.77 inches of rain, as computed by the National Climatic Data Center in Asheville. In fact, one station, NC-PK-2, has reached 69.61 inches of rain as of July 31.

How does our July compare to July of years past? What previous month was our wettest on record, and what year was it? Have our droughts happened in the past? Good questions, so let’s take a peek at the data from Tryon from 1917-2013.

Drought and rainfall, one thing we as humans tend to do is forget the past. Polk County just suffered through three years of drought, the rainfall for 2010, 2011 and 2012 was well below normal, but did you know that the lack of rain in 1988 was much worse; it just didn’t last for three years? The chart shows how the rainfall cycle changes from year to year, from 1917 through early August 2013.

What can you do? Join CoCoRaHS and start collecting your data.

You probably will find your rain can differ quite a bit from a neighbor. For those living along the escarpment and higher in the county, yours can be several inches different. If you do join, the Polk County coordinator has purchased a box of the recommended 4-inch rain gauges and Little Mountain Farm Supply on Highway 9 is helping out by being a central location for individuals to pick one up.

If you join CoCoRaHS, you get a gauge at cost, but if you would just rather have a nice gauge, you can pick one up there and pay for the gauge along with the shipping and handling. And you can join the Weather WAGS on Facebook, to see what your friends and neighbors are saying about their local weather.

To the editor: We owe a huge debt of gratitude to Sky Conard and the Green River Watershed Alliance she... read more