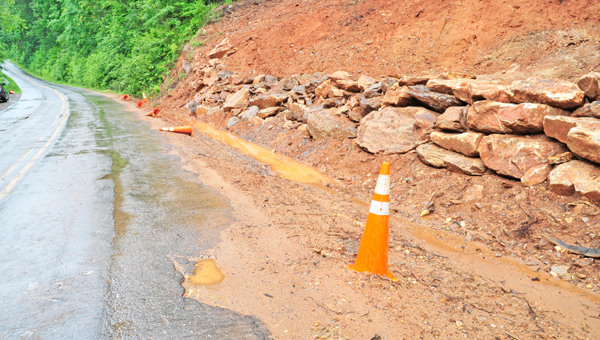 Green River Cove Road, between Silver Creek Road and Saluda, experienced a washout and eroded asphalt the week of July 4. Stones were put into place to reinforce the embankment and warning signs alerted motorists to the issues. The area received 1.67 inches and 2.87 inches of rain back to back on July 4 and July 5. Read the full story on page 3. (photo by Mark Schmerling)

You are not hearing a big fish tale when people claim to have gotten15-20 inches of rain at their homes last month.

Records collected by the Tryon water plant show the area accumulated 20.05 inches of rain in the month of July, almost four times the average monthly rainfall of 5.27 inches.

This average was taken from rainfall totals documented from 1981-2010.

“Our vegetable guys have had a real struggle. The first four Saturdays the tailgate market (in Columbus) was open, it was pouring rain. Even those that had produce had no one to sell too,” Vining said.  “And in the animal world, it’s been near impossible to cut hay because farmers can’t get it cured when they’ll cut it one day and it rains the next.”

Vining said several things have occurred because of the rain.

Disease plagued farmers early on as things like Downy Mildew became more prominent causing cucumber and squash plants to collapse, Vining said. Tomato growers also had to struggle with blight – the same disorder, Vining said, that caused the Irish famine with the destruction of potatoes.

The second issue was that anyone who could get tomatoes to grow likely couldn’t sell the produce at market because the fruit would split from absorbing too much water. Vining said many consumers won’t purchase split fruit even though it’s fine to eat.

A tree fell on this home at 186 Melrose Ave. Wednesday morning. A segment of Melrose Ave in Tryon., beginning... read more