Wayne Leonard Wilson, 77, of Tryon passed peacefully on Thursday, July 25, 2013 at his home and currently resides with the Lord and Savior. 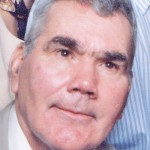 A South Carolina native, he was the son of the late Robert and Daisy L. Wilson.

A longtime textile worker, he was employed from age 21 to 73 until his retirement from Landrum Mills in 2009.

He was a member of Beulah Baptist Church and supported the Polk County High School athletics. Wayne enjoyed time with his family and will be dearly missed.

The family will receive friends from 3:30-4:45 p.m. Wednesday, July 31 just prior to the service in Beulah Baptist Church.

Memorials may be made to Beulah Baptist Church; 123 Beulah Church Rd. Tryon, N.C. 28782. An online guest register is available at www.mcfarlandfuneralchapel.com.