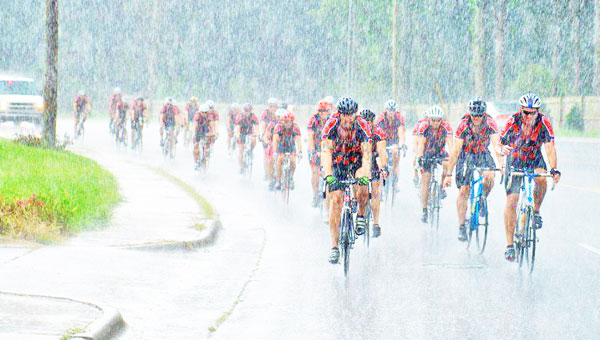 Rich Rauschenbach of Saluda and almost 40 other members of the Carolina Brotherhood cycling team during a charity ride last year. The team will ride through our area Aug. 15 to support the families of fallen police officers. See full story on page 3. (photo submitted)

Rich Rauschenbach of Saluda and almost 40 other members of the Carolina Brotherhood plan to cycle their way from the Greenville watershed through our area Thursday, Aug. 15.

Rauschenbach helped organize the local portion of the charity bicycle ride. This is the second year Lt. Richard Rauschenbach of the Asheville City Fire Department has joined up with the team comprised of 40 firefighters from North and South Carolina.

“Being a firefighter and a cyclist are two of my favorite vocations,” Rauschenbach said. “Raising money doing the things I love is very rewarding.”

The mission of the Carolina Brotherhood Bicycle Team (carolinabrotherhood.com) is to provide emotional and financial support for the families of those lost in the line of duty. The money raised goes directly to the victim’s families to help them move forward without having to worry with financial strains after loosing a family member.

This time, the ride is twice as long and goes through some of the hottest parts of South Carolina before finishing up in the cool mountain air of Boone, N.C.

The terrain is diverse and challenging as it follows the long flat hot tar roads in the center of South Carolina, in the hottest part of the summer, and then makes a slow and high ascent into some of most challenging hills in this part of the United States. What some may consider torture, Rich considers fun, because he is raising money for a good cause.

Because firefighters spend such a great deal of time together, working, eating and sleeping on the same schedules, Rauschenbach said they inevitably form a special relationship, an unbreakable bond often referred to as the “brotherhood.”  Firefighters and police face such adverse situations that can result in danger and injury and sometimes even death, it is important in the healing process of both the service people and their families to be able to contribute in some way.

This year’s ride will start in Rocky Mount on Aug. 10 and end seven days later in Boone, N.C. covering more than 700 miles. Overnight stops include Elizabethtown, Darlington, Columbia, Aiken, Honea Path, Hendersonville and Marion. The ride will average 100 miles a day and end with a 6,000-foot elevation climb on the last day into Boone. On Thursday, Aug. 15 the group will travel through Saluda and into Hendersonville.

Rauschenbach, his wife Joni and son Wylie have lived in Saluda for the past nine years.  Rauschenbach is also a volunteer firefighter for Saluda.

Donations can be made by visiting, www.active.com/donate/Fallen6/2013RRausch. Checks can also be mailed to Carolina Brotherhood c/o Rich Rauschenbach, 229 Greenville Street, Saluda, N.C. 28773.