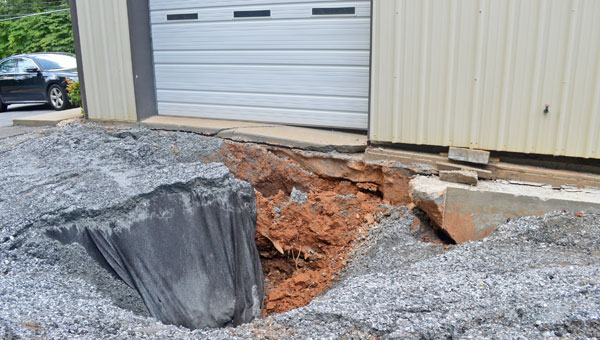 The second sinkhole behind Henson’s Collision took down the foundation and part of the side garage. (photo by Samantha Hurst)

Steve Henson of Henson’s Collision said the 4 inches of rain that fell near the South Carolina/ North Carolina state line Saturday, July 20 caused the second sinkhole in as many weeks to swallow part of his business’ parking lot.

“We felt the ground falling out from under our feet and then we started hearing a pop, pop, pop and realized it was the concrete crumbling from under the building,” Henson said.

Henson said Saturday afternoon when the heavy rain began to fall, he was driving back into town near his building and saw what looked like a river flowing down the street. The business had just repaired its parking area after one sink hole from rains the weekend prior. He said he and the man working to make repairs went behind the garage to look at the bank where water was eroding away the ground and began feeling the dirt crumbling.

Henson said water was running in under the walls and when the earth eroded away it began taking part of the garage with it. The portion of the garage attached to the main building had to be jacked up and reinforced with concrete.

Henson’s is currently working to repair its property with plans to replace the 40-year-old galvanized pipe currently running underneath the parking lot and refill eroded areas.

Henson’s Collision is one of several businesses affected by the heavy and frequent rains that have fallen over the last month. Another sink hole took out part of Tryon Pointe Orthodontic’s parking lot the same day. Both businesses remain open to customers. 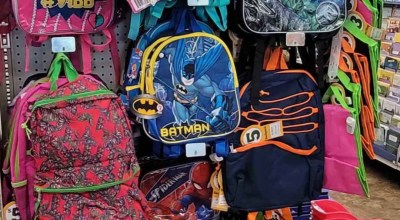