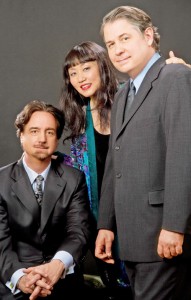 All three artists return to the TFAC stage by popular request. David Finckel and Philip Setzer performed here as members of the Grammy-award-winning Emerson String Quartet in October 2012.

Wu Han and husband, David Finckel, played here as a piano-cello duo in the 2006-07 season.

In recent years, the three have been regular collaborators, on stage and in the recording studio, performing piano-trio repertory. The happy union of David Finckel, Wu Han and Philip Setzer brings concerts that are lyrical, virtuosic and unforgettable.

Along with the group’s many awards, including several Grammy Awards, the Avery Fisher Prize and international honors, they are also recording artists, musical educators and highly acclaimed as solo and ensemble artists.

For the concert at TFAC on Sept. 27, the trio will perform the works of Beethoven, Shostakovich and Dvorak.

Visit the TCA website at www.tryonconcerts.org to read about the entire series and to hear examples of the artists’ performances.