Life in the wet lane 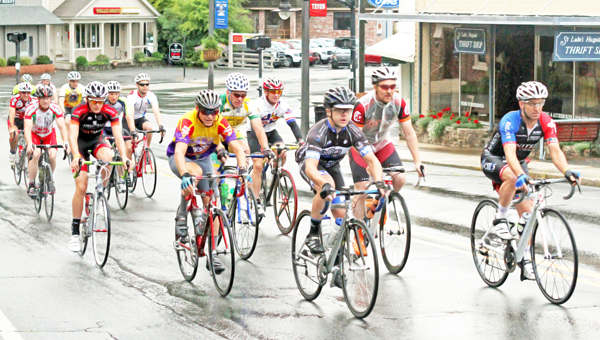 It has been a little more than two weeks since our nation’s birthday.  Since that time, I have been reflecting on the events of the day.

At 2:30 a.m. on the morning of July 4, I was awakened by a constant rumbling on the roof.  Oh no! It’s raining cats and dogs again. This was to be the day of the 30th Fabulous 4th Bike Tour, sponsored by the Rotary Club of Tryon. Funds raised from the event help local children through Reading is Fundamental and the Gift of Life programs.

It probably wasn’t going to happen. In spite of all the planning and preparation, it wasn’t worth risking the riders’ safety. It appeared that we might have to cancel the event unless there was a dramatic change in the weather. The biggest challenge was that the volunteers had nearly 100 miles of area roads to monitor, on a constant basis, due to the effects of the unceasing rain.

Even with improving weather, would it be possible to conduct the bike tour?

Time was passing slowly now and the rain continued. It was still dark when a group of Rotarians met at the Harmon Field cabin about 5 a.m. to make final preparations. Strangely, no one seemed antsy or even worse, dejected. We had coffee and Carol Browning’s homemade muffins and speculated about the weather.

As dawn approached, the rain had stopped. Riders were arriving to participate in the Fabulous 4th.  This was an encouraging sign. Soon, a fairly constant stream of bike-laden cars entered the parking area and riders began to assemble their bikes, talking and laughing with one another and completing the registration process.

When 7 a.m. came, all was at the ready. It still was not raining. There were even glimpses of blue sky and the sun. After a short safety speech, prayer and an “all clear” on the course, the bike tour kicked off with a release of 30 white doves to commemorate the 30th anniversary.

Between two and three hours later, most of the riders had returned, and all returned safely.  “How was the ride, I asked?” Most replies began with words like great, super and wonderful.  My reply began with the word fantastic. They accepted the closing of part of the course due to flooding and a downed tree.  Back at the cabin, the riders were in a festive mood.  After a good lunch they departed for their homes in the Carolinas, Virginia, Georgia, Florida and who knows what other states.

Last year, the programs supported by this event allowed Rotary to purchase and distribute about 1,300 books for Polk Central Elementary School and helped three local families with uninsured medical expenses for their children.

The Fabulous 4th Bike Tour is truly a community event. We owe a debt of gratitude to Wells Fargo Advisors for being the master sponsor and to the many local business people and volunteers who partnered with the Rotary Club of Tryon. Members of the club also contributed their time and donations to organize and support the bike tour.

Let’s continue to make these riders feel welcome in Tryon.

To the editor: When I read the July 15 News Briefs of the Polk County Board of Commissioners meeting, two... read more