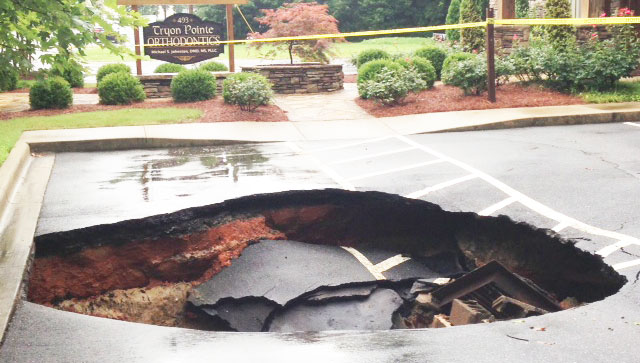 Heavy rains were expected to have caused this sink hole at Tryon Orthodontics. (photo submitted)

Tryon Town Manager Joey Davis said the rains caused flooding of the creek near East Howard Street. He said multiple boat docks on Lake Lanier were under water as well, with what appeared to be a large volume of water flowing over the dam.

“Flooding covered East Howard in the 400 and 700 blocks, as well as all of Vaughn Street,” Davis said in an email to Tryon council members. “Tryon Fire responded to the flooding as well as a lightning strike to a house at 62 Maple Street, a person struck by lightning on Skyuka Road, a DOA on Chestnut Street, a sinkhole in the parking lot of Tryon Pointe Orthodontics and one on Lanier Street on Lake Lanier.”