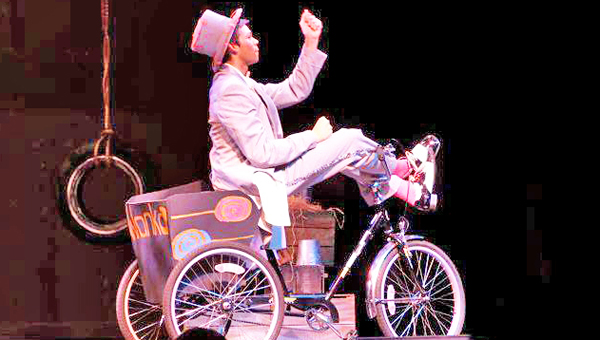 Well, it’s not exactly Tij D’oyen’s “Willy Wonka” – that honor goes to Roald Dahl who wrote the wonderful book “Charlie and the Chocolate Factory”- but D’oyen has certainly taken ownership of the role for the Tryon Little Theater/Youth Center’s summer production playing at the Tryon Fine Arts Center this weekend.

A recent graduate of Thomas Jefferson Classical Academy, D’oyen is now a rising freshman at the University of North Carolina School of the Arts an accomplishment in itself, since only 28 students are accepted into the drama program.

“I’ve always been an active member of the drama program at Thomas Jefferson and I love the theater because no matter how big or small the role that you’re playing, you have a chance to let people forget about their problems and feel something else – whether it’s joy or sorrow or elation. It’s an unbelievable feeling to be on stage and every time the excitement takes me by surprise.

“I’m really attached to this role because of the challenge I’ve been faced with.  When preparing for this role and discussing the character with my director, we both made it quite clear that we didn’t want to simply copy the Gene Wilder or the Johnny Depp ‘Wonka’.  So it was my task, with immense help from Jenna, to find my ‘Wonka’ and make the character my own and not simply a mimicry of the well-known renditions of the character.”