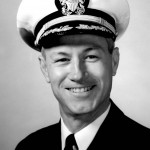 He was the beloved husband of June (Higgins) Meanix of Fairfax Station, Va., devoted father of Heather (Steve) Hudson of Fairfax Station, Va., William H. Meanix III (Billy) of Fairfax Station, Va. and Kimberly (Duff) Miller of South Glastonbury, Conn.,  and proud grandfather of Ryann Brzoska, Shannon Miller, Kelley Miller, Sean Miller, Tyler Hudson and William Miller.
He was preceded in death in 2010, by his younger brother Robert Meanix, Sr. but surviving are Robert’s wife, Nancy Meanix of Pisgah Forest, N.C.; and numerous nephews and nieces on both sides of the family.
Bill was born June 10, 1927 and raised in Jamaica Plain, Boston, Mass.
Encouraged by his parents, William Henry Meanix and Genevieve Augusta (Burns) Meanix, he became an accomplished scholar-athlete, graduating with distinction from Roxbury Latin ‘44, US Naval Academy ’49 and Harvard University’s Graduate School of Public Administration ’61.
A lifelong learner, Bill studied various subjects on his own such as math and physics but had a particular interest in foreign languages. Bill loved jazz and classical music and was known for being quite a dancer and the life of the party. He also greatly enjoyed following politics, the one subject that could elicit great passion in a conversation. He married Leona (June) Higgins on his birthday in 1959 in California.
Bill thrived in the Navy and commanded any room he entered with his full head of Irish white hair, easy smile and a thundering authoritative voice which masked in contrast, a very gentle and compassionate soul.  He had a fabulous sense of humor and particularly enjoyed the good pun.
After a distinguished 30-year career in the US Navy, Bill went back to school and earned his Juris Doctor in Law from the University of Maine ‘79. In his law career, he found private practice most satisfying.
Perhaps the only accomplishment he sought which eluded him was mastery of the game of golf. Bill enjoyed helping and rooting for the underdog, which is probably why he was a lifelong and avid fan of the Boston Red Sox and Washington Redskins.  After semi-retiring from law and moving to NC, he supported many social causes but gave the majority of his time to the Pacolet Area Conservatory addressing environmental and land use issues. When he wasn’t training for track Master’s competitions himself, Bill also lent his significant experience and expertise by working countless hours with middle and high school hurdlers in Polk County, whom he spoke of fondly and with great pride.
A funeral mass will be offered on Friday, July 26 at 3 p.m. at Church of the Nativity, 6400 Nativity Lane, Burke, Va.
Visitation will be the hour (2-3 p.m.) preceding the funeral at the smaller chapel of the church.  A private military burial ceremony will be performed at sea by the United States Navy at a later date.
In lieu of flowers, memorial contributions may be made to The Conservation Fund, 1655 North Fort Myer Drive, Suite 1300, Arlington, VA 22209.