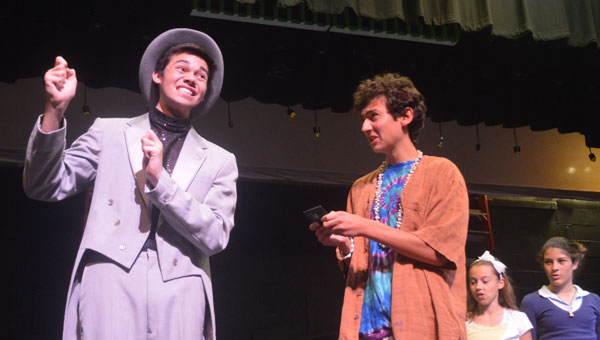 Audience members’ imaginations will be illuminated as a quirky, yet heartwarming host invites them to join on an adventure filled with pops of color and bursts of youthful exuberance July 18-21.
And what a world of imagination Tryon Little Theater’s summer production of “Willy Wonka” is with 42 youth performing.
Director Jenna Tamisiea said this version, based on Roald Dahl’s classic “Charlie and the Chocolate Factory,” was perfect for the youth theater program because it includes essentially 22 lead roles.
“What you get to see is so many kids letting their imaginations run wild on these characters,” Tamisiea said. “I think that is what makes the work really good is when all the kids feel like they are really involved in creating something.”
Tamisiea joined the annual youth theater workshop, hosted by TLT and the Tryon Fine Arts Center, last year to direct Seussical: the Musical. She said she couldn’t turn down the opportunity to be involved again.
This year’s musical features songs from the classic film starring Gene Wilder.
Jazzing up the show with a current flare are wall projections, black lights, cell phones, references to technology like Siri and hip hop oompa loompas.
“We’re adding all the modern flash so that kids can connect with that story on the surface level and then be drawn in deeper,” Tamisiea said. “We’ve got projections and we’ve got some black lights, but really for me what I’m most hoping will be the reason people bring their families is the heart of the story.”
Tamisiea said what strikes her is the idea that this wonderful little girl named Charlie can be chosen to take care of this facility because she has such a good heart and is honest.
Tamisiea said she hopes kids and their families will connect with Charlie because she is not rich, she does not have nice clothes, she doesn’t have a dad that will buy her a ton of candy bars but she has a chance to do something great.
“So many kids are going through that, so many people are going through what Charlie and her family are going through,” Tamisiea said. “How nice to go to the theater and see such a positive message on stage.”
Tij D’oyen, who plays Willy Wonka, said the opportunity to tell a story that profoundly affects people is why he’s so attracted to acting.
“My favorite thing is to make people ‘feel,’” D’oyen said. “It’s exciting to know that anything I do while I’m on stage could change their emotion. I can do something that makes them really, really happy; it feels great to be a part of that.”
Young actors around Tryon have had the chance to experience a similar feeling in summer youth productions for the last 40 years now.
Producer Betty Brewer said she and others worked to launch the program around 1970.
“In fact, some of the kids that will be on stage for this production, their parents performed in those early plays,” Brewer said. “It’s fun for me to see these second generation kids coming around.”
Those parents now discover themselves involved in a multitude of ways – baking cookies for snacks or taking on the monumental task of dressing four-dozen kids for the production.
Carol Cloud Rowell said she’s enjoying watching her daughter Cloe Rowell, 10, in her first youth theater production with TLT. Carol played Bloody Mary as a 12-year-old in South Pacific with TLT. Chloe is playing a funky Oompa loompa and a squirrel.
“For my child to be here at the fine arts center in her first production has been amazing. I feel so blessed to get to watch her perform and for her to have Betty Brewer in her life just like I did,” Rowell said. “It’s been great to share with her a love of theater and performing.”
Tamisiea said Tryon’s youth productions are wonderfully unique because they don’t turn kids away. In fact, when kids cannot afford the small fee associated with participation scholarships are provided.
“That is why kids keep coming back every year. The community is so behind it and there is such a rich history there – it’s really beautiful to see it unfold and every year for it to be such a great experience for the kids,” Tamisiea said.
The show runs July 18-21 at the Tryon Fine Arts Center in Tryon.

Peniel Rd. washout There’s been a lot of talk about Noah’s Ark in recent weeks with many wondering how long... read more