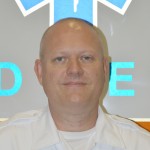 Crater was scheduled to start  his new position on Monday, July 15, but worked over the weekend monitoring roads and helping people stranded from washed out roads.

Crater was hired by the county following the firing of former EMS director Sandra Halford.

Crater has been employed by Polk County EMS since 1994, when he started as a paramedic.

Around 1997, Crater became the training officer/supervisor at Polk EMS, a position he held until April 2010. He then took the emergency services coordinator position at the Isothermal Community College, but remained with Polk EMS as a part-time paramedic.

“I just want to have some of the best trained people we can,” Crater said, “to enhance our local resources and work well with all the other agencies and better serve our community.”

Crater said people don’t understand the value of volunteers in Polk County who take care of all emergencies filtered through 911.

Crater said he is so pleased to come back to Polk EMS as it is home to him.

Crater grew up in Polk County and graduated from Tryon High School.