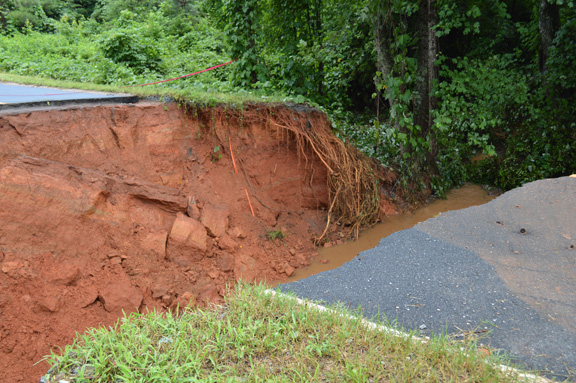 There’s been a lot of talk about Noah’s Ark in recent weeks with many wondering how long the rains can keep up.
The area saw the sun shine for most of the day, Monday, July 15 for the first time in 14 consecutive days.
The area has seen rain every day, with many days including heavy rains, the month of July for a total of 12.51 inches for the month. The average rainfall in July is 5.27 inches, according to the National Weather Service.
The average rainfall for the month of June is 5.38 inches. This year in June, the area received 9.25 inches, with May normally receiving 4.57 inches on average and this May saw 11.3 inches.
The results of excessive rains and storms were evident on several roads in Polk County over the weekend, including on Peniel Road where a large gap remains in a culvert that was overrun with water on Saturday, July 13.
Peniel Road remains closed between Hugh Champion Road and Hwy. 9. N.C. Department of Transportation (DOT) officials began working on the road Monday, July 15. DOT estimates it will take a few days to complete repairs, according to a report from Polk County Emergency Management.
DOT maintenance engineer for Transylvania and Polk counties Ben Williams said Peniel Road is being repaired with a larger pipe, head walls and large amounts of back fill to build the roadbed back. He said the area would be much safer once the repairs are complete.
DOT reopened all other roads that were closed over the weekend including Houston Road, John Watson Road, Bill Collins Road and Hwy. 9, near Polk Central Elementary School.
DOT officials were out in a heavy rainstorm that hit the area around 4 p.m. Sunday, where Hwy. 9 was closed all day Saturday with a similar scene to Peniel Road.
DOT officials said Hwy. 9 had a 20 ft. gap between it due to a culvert being overrun with water sometime early Saturday morning, July 13. The Hwy. 9 closure occurred near Polk Central Elementary School and was reopened after DOT crews worked to rebuild the road from 7 a.m. until midnight Saturday.
Hwy. 9 also had areas where rains were so heavy storage buildings were literally moved. One building was pushed and landed in the middle of Hicks McAbee Road, off Hwy. 9 in Mill Spring.
There are also three residences at Hawks Landing, off Golf Course Road in Columbus, who were stranded over the weekend, with the only access to their properties being with ATVs or horseback. The Polk County Emergency Services (EMS) is keeping close contact with the residents to ensure they have everything they need. It is also unknown when the Hawks Landing bridge can be repaired.
Local fire and rescue teams were nonstop over the weekend with calls from residents who couldn’t go any further due to roads collapsing and downed trees and power lines.
The Tryon Fire Department was called to a tree and power line down Sunday morning on Howard Gap Road with many Tryon area residents being without power much of Sunday as a result. Their power was restored Sunday evening.
Tryon officials also responded Sunday morning to a main water line break at Depot and Pacolet Streets downtown. Other areas affected by high waters or road closures over the weekend included Fox Mountain Road, Vista at Riverbank off Sandy Plains Road, John Shehan Road and Whiteside Road.
Polk County EMS Director Michael Crater urges residents to not cross standing water because what may look like two feet deep to a driver could in reality be something washed out 10 ft. deep underneath.
Crater said emergency management staff was out all weekend checking areas and assessing damage. He also said people should remain cautious this week especially for road failures and trees which are saturated.
“We’re doing everything we can,” he said on Sunday as he took the Bulletin on a tour of failed roads throughout the county. “We’re in overdrive right now.”
Crater urged residents to only call 911 for an actual emergency. Residents calling in to report high water or other issues should call the EMS non-emergency line at 828-894-0187.
The total rainfall for the year is currently at 40.81 inches of rain, which is much more than normal. A normal average for the year by the end of July is 35.52 inches. The yearly average total for Tryon is 61.77 inches of rain.
The most rain in one day the area has received in July, according to the National Weather Service’s Tryon monitoring station, occurred on July 4 at 2.87 inches. Friday, July 12 the area received 2.6 inches of rain, according to the NWS.
The area is still nowhere near the record rainfall in a day. On Oct. 25, 1918 the area received 9.05 inches of rain, according to the National Weather Services record data, recorded from 1917 through 2013. The 10th highest precipitation in one day occurred on Aug. 18, 1985 with 6.09 inches of rain.