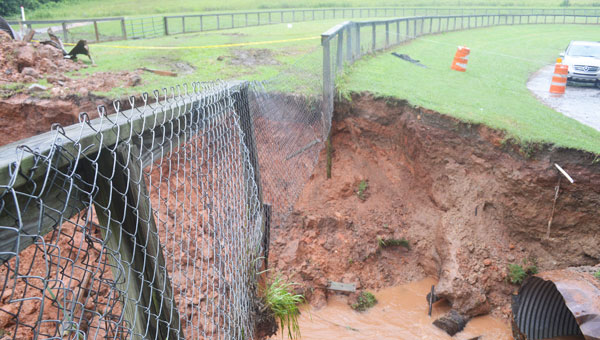 One of two damaged culverts along the FENCE steeplechase track. (photo by Samantha Hurst)

Red dirt crumbled into the rushing water Sunday, July 14 carving out wider and wider ruts in two sections of the FENCE steeplechase track. 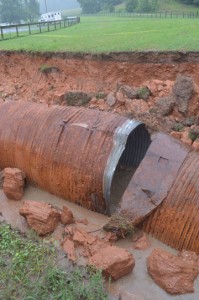 Water flowing through his culvert near the Main Gate entrance of FENCE continued to break away the ground surrounding it. (photo by Samantha Hurst)

Two culverts that allowed the Blockhouse Creek to run under the track gave way sometime between Friday night and Saturday morning taking down mounds of mud and creating unsafe ground conditions in areas of the facility. Tryon Riding and Hunt Club president Nancy Wilson said JP Godard arrived on site at 6 a.m. Saturday morning to ensure all of the outdoor rings were in good enough condition for the more than 250 entries traveling to Tryon for this weekend’s horse show. That’s when the gaping holes in the track were found. “We knew we had issues there already with the culverts,” Wilson said. “But Mother Nature has sped us along and now we’ll be able to take care of it faster and better. FENCE president John Boyle said in the past year minor repairs had been made to shore up the strength of the culverts. He said plans were already in the works for work to be done this fall. “We knew there was a limited window as to how long those culverts were going to last,” Boyle said. Engineering and surveying were to start later this summer with plans for work to begin during the typical break in shows in August. “This is a situation that will benefit us in the end,” Boyle said. “We’ll have the time to get the pipe in, get the turf in place and have a growing season before next May for the 2014 steeplechase.” Wilson said she was amazed to see that none of the facility barns flooded. She said that is to the credit of a three-year-old conservation easement running through the center of FENCE. Nelson said the underbrush and vegetation helped prevent the center of the creek from eroding away. Boyle agreed that it kept a bad situation from getting worse.