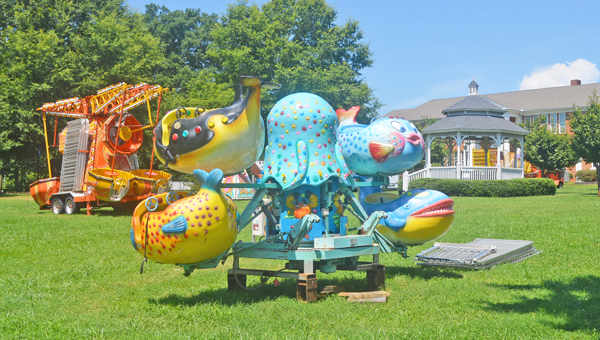 Carnival rides left over from the dampened Columbus Fabulous Fourth event remain on the lawn at Stearns Park. Another carnival was set to come to town July 10-14 but cancelled when they could not set up this past Sunday. (photo by Samantha Hurst)

Unstable ground conditions and miscommunication can be to blame for the cancellation of the Polk County Carnival originally scheduled to open today at Stearns Park in Columbus.

Signs depicting a young girl riding a carousel went up around town about two weeks ago. When the crew came to set up rides this past Sunday, July 7, however, they had nowhere to go.

Smokey Mountain Amusements Inc. owner Billy Clark said amusement rides leftover from the Columbus Fabulous Fourth prevented them from getting on the lot.

“They had a carnival already set up over there. They told us there might only be a few blow ups there but they had a whole carnival still set up,” Clark said.

Columbus Town Manager Jonathan Kanipe said the Bulletin’s call was the first he had heard that the carnival was not coming to town.

He said ABC Party Rentals had not moved their equipment over the weekend for fear it would damage the Stearns Park property, which remains soggy and muddy from continuing rains.