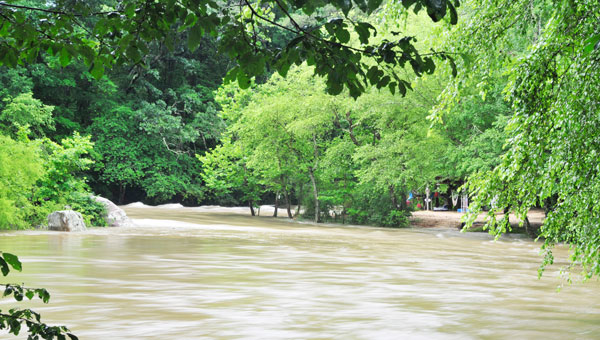 Only five days into July, Polk County almost reached last year’s average rain total for the month. In July 2012, Polk County received an average monthly rainfall of 7.9 inches. As of Friday, July 5 at 5 p.m. the county had accumulated 5.19 inches of precipitation and more rain was expected.

All of this rain has led to lost revenue for several area businesses and potentially dangerous conditions on roadways and rivers.

“The rivers are so high all responsible outfitters are canceling trips,” said Green River Adventures owner Sara Bell in an email Thursday night. “It’s a huge hit financially, because it’s the 4th of July weekend, but it’s not worth the risk.”

A sign outside of Green River Tubing read, “Closed” on Friday as well.

Co-owner Wendell Gillespie said his tubing business was closed all day Friday, July 5, but that he hoped the river level would drop enough to allow him to serve clients on Saturday and Sunday.

While recreation companies closed their doors July 4, first responders were out full-force.
The heavy downpours resulted in multiple calls for downed trees and power lines and high waters.

The Tryon Fire Department responded to multiple trees down throughout July 4 as well as flooding over Vaughn Street, which caused emergency responders to close the street for a few hours, according to Tryon Town Manager and Fire Chief Joey Davis.

There was also minor flooding in other parts of town, including Screven Road, where water tends to pond/pool during heavy rains. One of the trees/power lines down was around Lake Lanier and all others were inside town limits, Davis said.

Landrum also responded to a house and yard flooding on Campbell and Rickert Avenues. A power line was also down on N. Laurel and Trade Street, as well as a vehicle accident with no injuries.

The Columbus Fire Department responded to several trees down and responded to a vehicle accident on Hwy. 74 during the July 4 holiday.

Mark Schmerling contributed to this article.