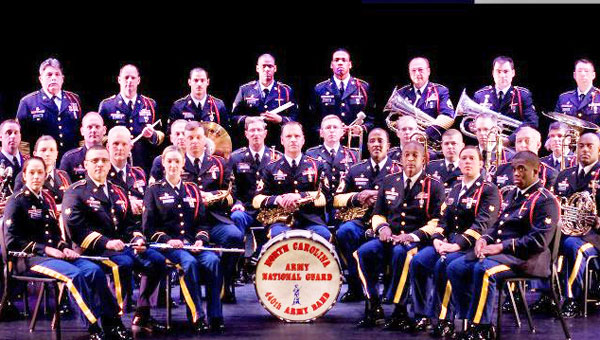 The 440th Army Band has served as the state’s National Guard band under several designations since the early 1900s.
The band was activated in World War II as the 30th Infantry Division Band along with the rest of the North Carolina National Guard as the “Old Hickory Division.”  The band served with distinction landing on the beach at Normandy and fighting in the Battle of the Bulge for which the band carries honors awarded by France and Belgium.

The band was re-designated the 440th Army Band in 1973. The band performs for troops and their families and for the citizens of North Carolina at ceremonies, public concerts and parades.  As the 440th Army Band, the band has performed two concert tours in the Virgin Islands, and toured Guatemala, Morocco, Costa Rica, and Italy. Since September 11, 2001 the Band has performed over 500 ceremonies for deploying and returning North Carolina National Guardsmen and their families.

The 440th Army Band is comprised of citizen soldiers, who in civilian life are college students, educators and business professionals. The band has earned numerous awards including Outstanding North Carolina National Guard unit and the Eisenhower trophy three times as an outstanding Army unit.

The 440th currently has 34 members and is commanded by Chief Warrant Officer/CW2 Brent M. Harvey, who in civilian life is a professor of music at Winston-Salem State University.

The mission of Army bands has changed over the past decade. The need for smaller units with flexibility and variety in use developed a modular structure within Army bands. Although the concert band still performs, the majority of our missions are supported with Music Performance Teams.

Concert band: All members participate in the concert band. A typical “pops” concert by the concert band is usually an hour in length and consists of military marches, contemporary music, classical or traditional music and patriotic music.