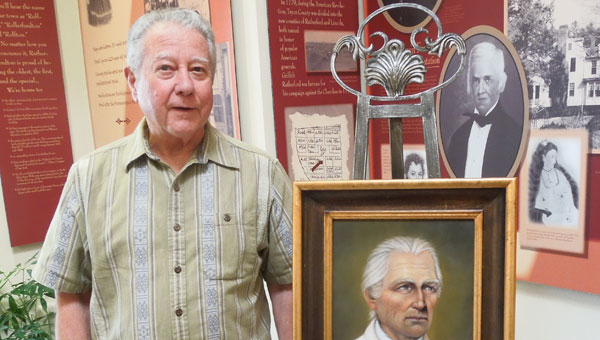 Ambrose Mills of Tryon, a direct descendent of Colonel Andrew Hampton, assisted with the unveiling of a portrait of the Revolutionary War hero, at a special ceremony at the Rutherfordton Town Hall on July 19. (photo submitted)

The first known portrait of Colonel Andrew Hampton, commander of the Rutherford County Liberty Men during the defense of Charleston and in the battle of Kings Mountain, was unveiled June 19 at the Rutherfordton Town Hall.

The portrait will remain on display at the town hall for three weeks.

“This is a long past-due honor for one of the great pioneers and heroes of our area,” Bradley said.

The ceremony included remarks by Martin Mongiello of Grover, N.C. and one of the ARWLHC founders. He commissioned Pauley to produce a series of portraits of the heroes of Kings Mountain.

“Rutherfordton was selected as the site for the public unveiling,” Mongiello said, ”because Hampton lived only a few miles west of the town, his family played a major role in the early development of the county and many of Hampton’s descendents still live in the area.”

Pauley, an artist specializing in historical as well as contemporary portraits assisted with the unveiling. His passion for the Revolutionary War figures comes from a keen sense of history and appreciation for the battle sites within close proximity of his York County, S.C. studio.

“Many of the heroes of the back country militia leaders were simple men who never sat for an artist and of whom no graphic likeness exists today,” Pauley said. “Andrew Hampton was one of those heroes that history has almost forgotten. By analyzing dozens of photographs of Hampton’s descendents and comparing common facial features, I produced a reasonable facsimile of what he must have looked like.”

Hampton’s descendents from Rutherford and Polk counties and as far away as Texas and Arkansas contributed old photographs, some dating back to the mid 1800s, for use by Pauley.

“Initially, I made several sketches, giving attention to the details around the eyes, cheekbones and hairline before putting the finishing touches to an oil portrait,” he added.

Andrew Hampton settled on Mountain Creek in what was then called Tryon County in 1770 and was a captain in the frontier militia. The father of 15 children, he was a prosperous farmer and miller.

In 1775, he resigned his Royal commission when he signed the Tryon Resolves, which declared the area’s support for the struggle against British tyranny. Hampton was major in General Griffith Rutherford’s 1776 expedition against the Cherokee Indians. When Rutherford County was created in 1779, he was promoted to colonel and given command of the new county’s Patriot militia.

He was 67 years old at the battle of Kings Mountain. Two months later, at the Battle of Blackstock plantation near Spartanburg, he led the Rutherford riflemen as they inflicted heavy causalities upon Banastre Tarleton’s Legion. Hampton resigned his military commission in 1781 and then served three years as sheriff of Rutherford County. He died in 1805 and is buried near Mountain Creek.

Other first-ever completed portraits of Kings Mountain heroes by Pauley that are on display at The Inn of the Patriots in Grover include Colonels Frederick Hambright and Benjamin Cleveland, and Ishmael Titus, a free African-American who fought with the Patriots.