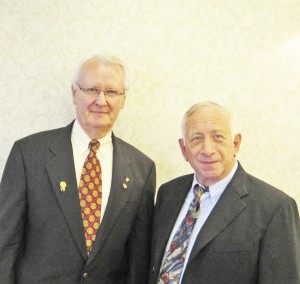 Shown are Rotary past president Don Lyons and Rotarian of the Year for Tryon, Dave Cornelius. (photo submitted)

Beginning in 1974 and each year thereafter, the Rotary Club of Tryon has selected a Rotarian of the Year.

The award is named in honor of the late Joseph W. Wells who, as a member of the local club, served as Rotary District Governor for western North Carolina in 1974.

Selection for the annual award is based on the ideal of Rotary, which is “service above self.”

The club is pleased to announce that this year’s recipient is Dave Cornelius who was presented the award by Past President Don Lyons at the club’s annual meeting.

As noted in the presentation, Cornelius has long served admirably as the treasurer of the club and on the Board of Directors. He has been a very active volunteer for all of the club’s projects to included Career Day, Shrimpfest, Community Chorus and environmental improvement and has been a strong supporter of the Rotary Foundation to promote world peace and understanding. In addition, Cornelius has been an active volunteer for TFAC, the Red Cross and other organizations.

The Rotary Club of Tryon is very proud to recognize Dave Cornelius for his outstanding contributions to Rotary and to our community.