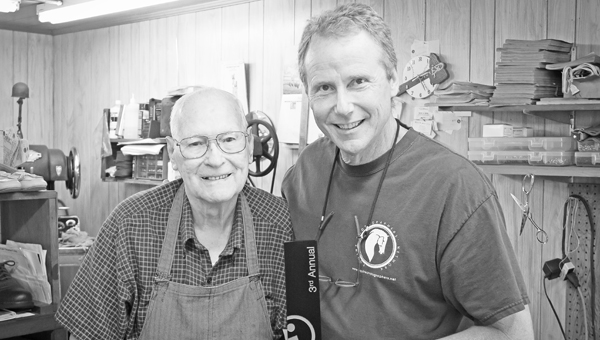 Henry Linder did try to give up the shoe repair business once.

It was 1991, and he was about to turn 72. He figured he was ready to stop fixing footwear and spend more time in the yard.
That lasted about three months. Linder and his wife were on Social Security and needed a little extra income – but mostly, he missed his customers.
Now, at 93, this gentle craftsman with a thick Southern accent, a faded blue apron and a gift for gab is still charming customers in the shop behind his home in Landrum.

Linder is a beloved fixture of Landrum, a town of 2,400 people in the Blue Ridge Mountains between Spartanburg, S.C., and Asheville, N.C. He has been featured in countless local newspaper stories and was the grand marshal of the town’s 2008 Christmas parade.
“I make other people happy, or I think I do – they say I do,” Linder said in an interview with CNN. “People want to know when I’m going to quit. I say, ‘when my toes are turned up.’”

After learning about Linder years ago, a local filmmaker thought the cobbler deserved a little more recognition. He wasn’t alone.
Erik Olsen’s 2012 short documentary about Linder, “The Shoe Cobbler,” won the Community Choice award in the third annual iReport Awards. The three-minute film was picked by audience votes from among 36 nominees in six categories of audience storytelling.
“This was a wonderful look of what America can be at its best,” one viewer wrote. “We need more Mr. Linders in our society.”
Linder, who doesn’t own a computer, is a little baffled by the attention.

“I guess people are just interested in me. I’m thankful for that,” Linder said. “I guess they think it’s pretty fascinating to be an old man still fixing shoes.”
When Olsen made the film, he said he felt he needed to share Linder’s story before it was too late.
“The fact that he’s still on his feet … his attitude about people and business is just so uplifting,” said Olsen, a former news photographer for a couple of ABC affiliates in North Carolina. He went into the shop one day, asked for an interview, and edited the piece that night.

Linder was 17 when he first started repairing shoes during the Great Depression. Horseback riders make up much of his business, but over the years, he has given new life to all types of leather products, including children’s baseball gloves, handbags and even a lady’s corset (that was probably his oddest request, he says).
– article submitted
by CNN