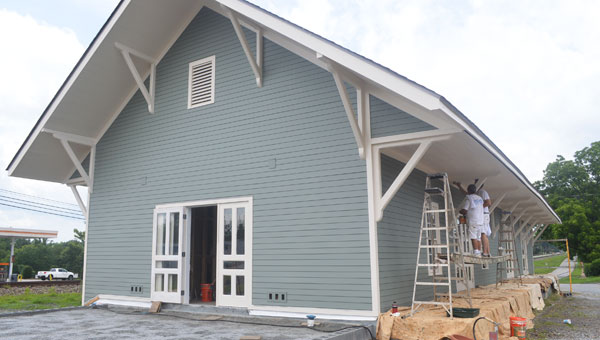 McCarty Painting works on the trim of the Landrum Depot. Work is expected to be complete by August. (photos by Samantha Hurst)

McCarty Painting of Landrum brushed a coat of paint onto the trim of the Landrum Depot Thursday, June 27 putting the building’s exterior just steps from completion.

Landrum City Administrator Caitlin Martin said the renovation project is expected to be complete by August. Daniel Owens Construction of Landrum is the contractor. 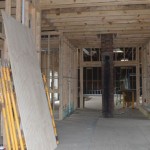 Progress is underway on the interior of the depot.

“We’re really excited about what the finished product will look like,” Martin said.

Martin said some of the elements such as hardwood flooring, tile and a state of the art AV system will enhance the building’s usefulness to the community. She added that grants from the Polk County Community Foundation’s Mary F. Kessler Fund provided $9,000 for the AV system and $7,000 for the outdoor stage.

Martin said the stage and landscaping are the last exterior items left. The interior, however, still has a little way to go.

Architect John Walters said now that work is complete to reinforce the ceiling, crews can move on to the electrical, heating and air, and plumbing. He said sheetrock, doors and trim would follow.

Building the stage and landscaping will be the last item on the project list, with bids going out for that portion next month. Walters said he thinks the public will be very happy with the depot’s makeover.

“If you had been in it before they had done anything, the old meeting room had no windows; it had dark paneling. Now it’s really nice and bright in there,” Walters said. “I think it will be very attractive for events.”

Walters said he and city officials worked to to keep the elements similar to the historic design of the depot. The color – dark sage gray with white trim – was selected to match post World War II colors. The Southern Railway Historical Association provided the paint chips that would fit historical specifications. The Tryon, Hendersonville and Old Fort depots, Walters said, are all painted in a bright yellow in line with the style of depots built prior to World War II.

Signs to hang at each end of the depot will also have “Landrum” written with a lettering style that will all but match the old signs that once hung on the depot. Martin said the city also plans to include a historical display inside the depot to present items found on the property during the renovation process – old receipt books and bullet cases.

“Everyone around here has been very excited about the progress,” Martin said. “People coming into town have been really inquisitive and want to know more about its history and when it will be finished so they can come back.”